Note: This post is for educational purpose and a part of our entrepreneurship training where we aim to teach you how to think outside the b... 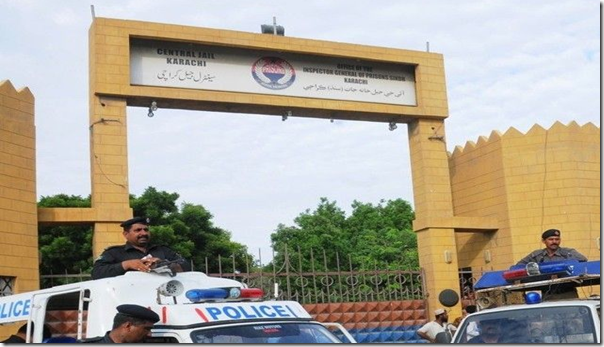 Note: This post is for educational purpose and a part of our entrepreneurship training where we aim to teach you how to think outside the box and explore the world with open eyes.

We have seen enough of good human beings but sometimes meeting people who are convicted or under trial for committing crimes help you to look at this dark world from a different perspective. I live near National Stadium and I often cross Central Jail Karachi to reach my office which is located on Main Shaheed Millat Road. I was always curious to know what exists behind those tall walls and how does life looks like from inside. Fortunately on 20th August 2016, I went for a prison tour thanks to my friend Hussain Kango whose father Aurangzeb Kango is SP Police and administrator at "Youthful Offender Industrial School Karachi". What I saw inside completely changed my negative perception about life in prison.

Hussain Kango also accompanied me in our Eureka Seminar that was organized on 13th August. You can read more about it below:

Just like any normal citizen who has not seen prison from inside, I thought Jail was a nightmare zone with dark sophisticated rooms with poor ventilation, limited access to open air and no quality food. Prisoners in jail would be living in small cages like animals with guards surrounding them from all corners. This is the image we all have in mind thanks to movies and dramas that we watch on daily basis through local television networks. But the reality literally shocked me.

A Jail or Prison is different from Police Thana (station) where you see small rooms with iron bars at front. A Jail is basically a learning institute where criminals are taught how to become civilized human beings. Central Jail Karachi is the second largest jail of Pakistan housing over 6000 prisoners including convicted terrorists and international militants like murderer of Daniel Pearl. The jail is divided into three sub-jails which are:

Central Prison For Women is a Jail for women prisoners which is sub divided into two sections for boys and women. This prison is dedicated especially for "Women" mostly but a small section is dedicated for teenage boys for their schooling purpose and this smaller section is called "Bacha Jail". Boys and women are kept in separate barracks divided by huge 20+ Feet walls, with no direct contact in between. We were allowed access to the boys prison only. The women prison is safely guarded by trained female police guards and only women or authorized staff is allowed access.

What Did I Saw Inside Prison?

I was accompanied by Hussain Kango (center) and another friend from Islamabad named Muhammad Fahad Raza(right). 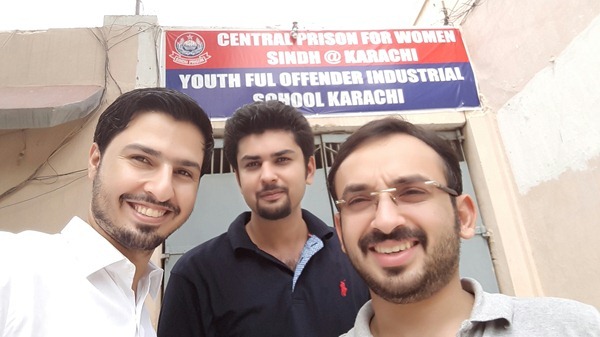 We received a kind reception by SP Aurangzeb Kango who is surely an educated and senior police officer. Whatever that you will read later on happened due to SP Aurangzeb's hard work for Jail prisoners. 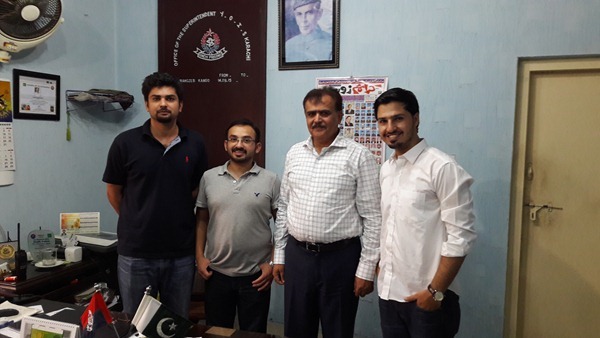 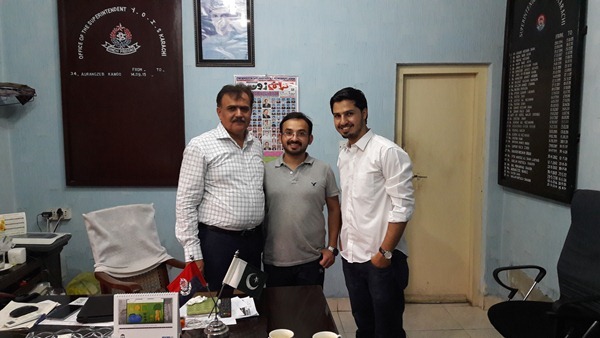 Our mobile networks seized to work due to jammers. Telephonic communication could be done only using landline PTCL. Mobile phones signals do not work as soon as you are at a distance of 100 meters away from jail. This is done due to security precautions. Jail is now surrounded by bomb proof walls from all corners, which is a development that occurred after a failed penetration through tunnels by TTP.

The moment guards were informed about our arrival. I felt like watching a movie. The world behind large Metallic Gates uncovered for the first time in front of my eyes. I saw a large green ground with ducks moving to my left and a small playground area for kids as shown in the image below. 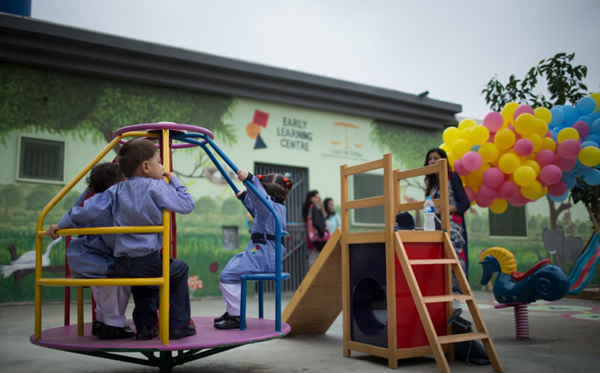 To the right of this play area was a kitchen for prisoners. The food menu was really impressive. Prisoners were served chicken thrice a week and beef once a week. Apart from beef and chicken major menu was Moong Ki Daal, Daal Masood and similar seed recipes. Sir Aurangzeb told us that the staff including him, eats the same food that the prisoners are served and the food is cooked by a contractor and not by the prisoners. Hussain told me that the food is so delicious that it outstands the food we eat at home when it comes to taste. I never expected that prisoners would be served with meat 4 days a week and this was surely a great discovery in its own.

We were not allowed to take pictures but we were told that a TV drama by the name "Ye maira dewanapan hai Episode 31" has been recorded here so we will find most of the screenshots there. Sir Auranzeb Kango has himself acted in it also which you can watch below during the duration 9:15-15:00 of this video.

After the second gate, we moved towards Gate 3 which was preceded by a long pathway surrounded by two 20+ feet long walls on both sides as shown below:

Every gate was guarded by two police officers, who would salute SP Kango the moment we would cross them. I saw around 100 teenage boys running towards the mosque on our left because it was time for Zuhr prayer.

We then visited the barracks which were large rooms to house over 50 prisoners. All prisoners were kept inside the same room. I saw comfortable beds, with windows on all sides for ventilation, fans and even a small TV where prisoners could see documentaries and behavioral programs on fixed schedule basis. 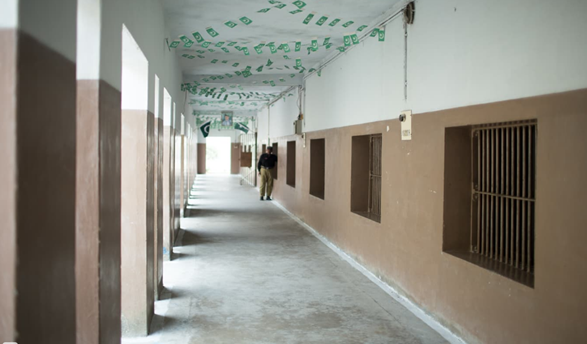 Guess what I saw next?

Before we could exit, we took some photos with prison guards on exit gate. 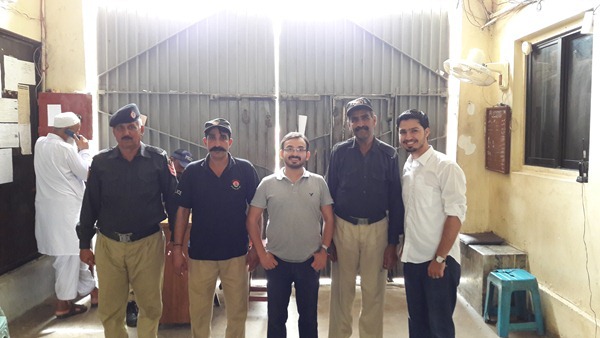 Hope I could give a helicopter view of life inside prison. Signing off from Central Jail Karachi! =) 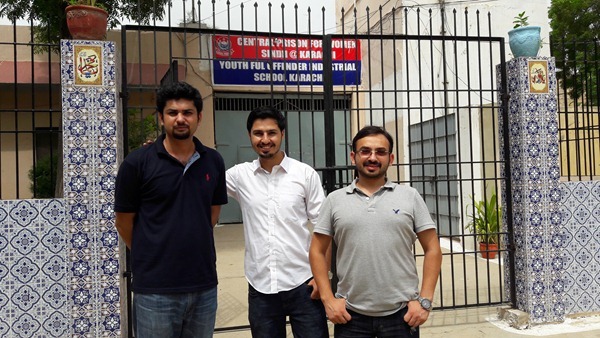 What are your views about life in prison after reading this blog post? Do you think educating prisoners inside jail and providing them with comfortable environment would help them to become better citizens or you are in favor of a more harsh environment. Do share your precious views by commenting below.