--> It all Started With "Gold is Worthless!" – CHAPTER[1.1] | Experience Lab - Online business creation and development guide for bloggers and startups

Gold is the only form of real money with intrinsic value , that has survived over 5,000 years to act as a sustainable and reliable mediu... 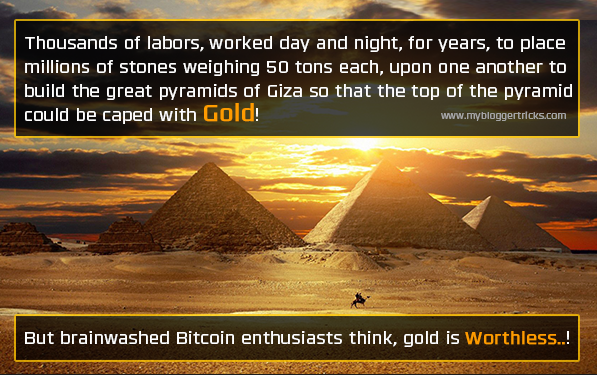 Gold is the only form of real money with intrinsic value, that has survived over 5,000 years to act as a sustainable and reliable medium of exchange and measure of value. Behind every prosperous and progressive civilization such as Egypt or Athens, you will find gold and also silver as the sole medium of exchange for macro and micro transactions, thus opening gateway to global trade and commerce.

Gold and silver are also referred to as Dinar (gold) and Dirham (silver) in Arabic.

Gold (Ag) and silver (Au) are precious metals or in other words they both contain stored energy that can neither be created nor destroyed.


What Makes Gold So Valuable?

Bitcoin enthusiasts brainwashed by the elite believe that Gold is considered to be valuable just because the humans trust it to be precious else it is just an ordinary stone like the rest....

Really? Were the history’s largest human empires so stupid that they would fight for generations with each other just for some shiny stones with no good use?

Well read the following 10 reasons why Gold is so valuable and what gives gold its intrinsic value. These reasons are enough to crush the elite’s propaganda against gold:

Can You Eat Gold?

Sarcastically, yes you can!

This is probably the most popular yet the most illogical question asked by gold haters. The elite does so just to confuse the public and make gold look inferior to a valueless paper and digital currency. A contrary question would be can you eat paper or digital currency? Of course you can't!

Gold is money and a perfect store of wealth. Money is not necessarily something to be eaten but its a tool required to purchase resources (wants/needs) essential for your survival as a human on earth.

For argument sake and to kill this baseless objection raised by the elite, I guess I have something interesting to share.

I know this sounds weird but a New York City food truck was reported to be selling a $666 hamburger dubbed the “Douche Burger,” which contains lobster, caviar, truffles, and a beef patty wrapped in six sheets of gold leaf. 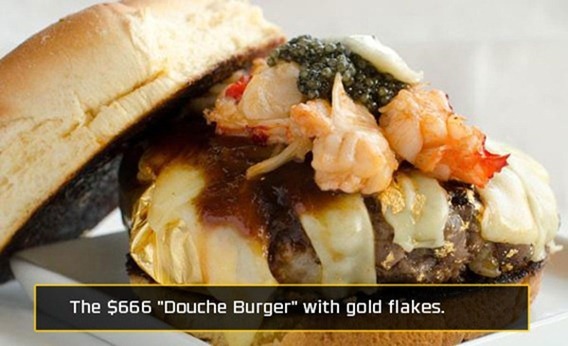 Pure gold (i.e. 24-karat) is chemically inert and easily passes through your digestive system without being absorbed into the body. You can eat pure gold or silver leaf, flakes or dust without falling ill. 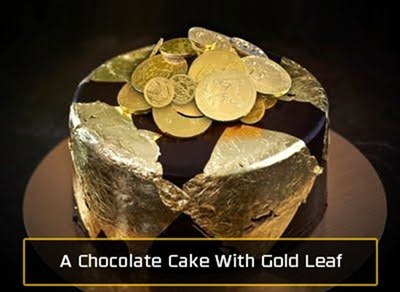 Europeans have been adding gold leaf to food and liquor since ages. Gold leaf can also be found in Japanese and Indian candies and South Asian pastries.

Homeopathic experts have even recommended gold as a treatment for heart disease, arthritis, depression, and other ailments for hundreds of years. People in India and Pakistan even eat "Paan" wrapped in a golden leaf costing around $100 each. I just hope now the Bitcoin enthusiasts won’t mind trying out gold in a dinner! =)

Did you know? Gold is such a precious and useful metal that it exits even in human body. The average 70 kg (150 lb) adult human body contains approximately 0.2 milligrams of Gold!

Gold plays a vital role in maintenance of the joints and also in the transmission of electrical signals throughout the body.

The true value of gold is surely based in its relative rarity, easy handling and minting, easy fabrication and smelting, corrosion resistance, thermal stability, its nobility to chemical reactions and lastly its unique shiny color.

Bitcoin creators call gold worthless in order to devalue the intrinsic value of gold which their bogus digital gold(Bitcoin) don't have. By defaming intrinsic value they try to build a justification to prove Bitcoin as a digital gold and thus brainwash people that bitcoin has almost all the money characteristics of real gold.