Major Differences Between Gold Vs. Bitcoin Vs. Paper – CHAPTER[1.4]

Following are unique functions and properties of money vs. currency, that differentiates between gold, paper and Bitcoin. Note: Remember...

Following are unique functions and properties of money vs. currency, that differentiates between gold, paper and Bitcoin.

Note: Remember that both paper currency like US Dollar and cryptocurrencies like bitcoin are fiat currencies backed by nothing. 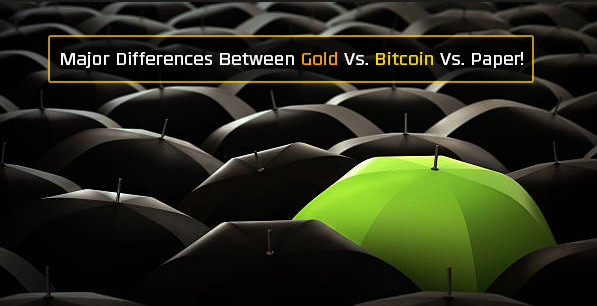 Watch the video below from the selected time frame to understand each of these properties more clearly using a video illustration:

Gold came out as best candidate for money because of these reasons:

Gold has been used as money for many reasons. It is fungible (interchangeable), with a low spread between the prices to buy and sell. Gold is also easily transportable (portable), as it has a high value to weight ratio, compared to other commodities, such as silver. Gold can be re-coined, divided into smaller units, or re-melted into larger units such as gold bars, without destroying its metal value. The density of gold is higher than most other metals, making it difficult to pass counterfeits. Additionally, gold is extremely unreactive, hence it does not tarnish (durable) or corrode over time.

Both gold and fiat currencies have almost all properties in common just like in the case of “Cowry shells” except for the most important two properties i.e. Intrinsic Value and Store of Value.

Having no Intrinsic value means that you can not use the currency for anything else except as a medium of exchange. You can't eat paper or bitcoins, you can't make tools using them, you can't use them for any industrial purpose.

Bitcoin enthusiasts argue that, since millions of dollars are invested to mine bitcoins and expensive computer hardware and electric energy is used to solve the hash functions, every bitcoin created actually has a lot of worth!

True no doubt in it, but wait! Does acknowledging this, changes the fact that If I invest millions of dollars to buy cents for dollars (creating nothing out of something), are those cents better than dollars in true value? Of course not! 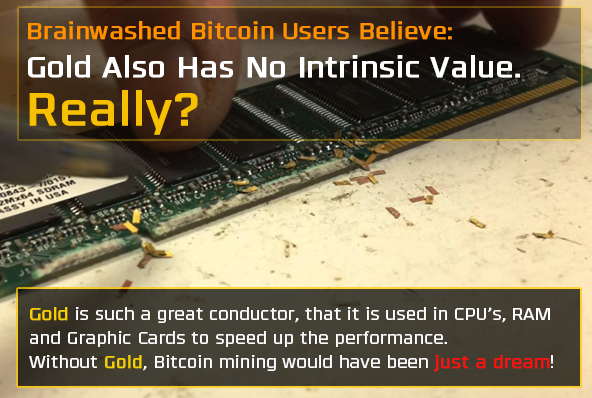 Intrinsic value does not mean that crap served on a gold plated plate is now worth something, a crap remains a crap in its true physical or virtual form.

For a money to act as a store of value, it must be able to be reliably saved, stored, and retrieved.

Having no store of value means that the currency does not maintain its true worth or value over a long periods of time, thus losing its purchasing power drastically.

If $200 could buy you a home computer (PC) twenty years ago, then the same $200 wont buy you even a mediocre smart phone in 2017. Because the fiat/bogus US dollar leaks its purchasing power every single year. But the same One oz of gold, twenty years back ($288 at that time and $1298 today), can buy you the same product even today! It will even save you a lot of money as savings. Around $700 as savings if you buy a quality home computer at $600 today!

That's the power of true money because it never looses its purchasing power. This is why ancient civilizations or todays great powers like China and Russia has always trusted Gold over the fraudulent paper dollar, for trade and commerce.

A bitcoin worth $3,000 today, could be worth $2,000 after a week due to its extreme rate of volatility. A Bitcoin can loose 20%-30% of its value within few days. Which is far worse than paper currencies where a one percent (%2) change in local exchange rate vs. US dollar, could simply crash the stock exchange and set the economy of the country on red alert.

Bitcoin is undoubtedly the worst kind of currency ever introduced that is hardly a store of value and whose foundation can shake with slightest media speculation.

Without the intrinsic value and store of value, every currency is a scam, a lie and a deceitful imposter that is silently stealing away your two most important assets i.e. your Time & Freedom.

This is how US dollar has betrayed us for decades and after its collapse, this bogus legacy will be carried over by cryptocurrencies i.e. Making the rich, richer and poor, poorer.

It will transfer the real money (Gold/Silver) silently to the rich through the power of mathematics, technology and media speculation. Ultimately gaining complete population control via electronic scripts and artificial intelligence to monitor every single economic activity going on earth.

Bitcoin has no intrinsic value says the legendary investor and philanthropist, Warren Buffett in an interview to CNBC.

Stay away from bitcoins, its not a currency. The idea that it has some huge intrinsic value is just a Joke. — Warren Buffet on CNBC 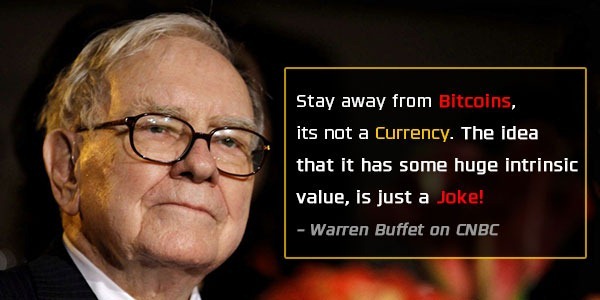 Warren Buffett: “Bitcoin Is An Asset That Creates Nothing”

The same man who has taught half the world on how to invest carefully is now being mocked and trolled as "Outdated white guy" by bitcoin community who are always driven by greed. Greed makes one both blind and arrogant.