--> Who Actually Created Bitcoin and Who Did not? – CHAPTER[1.5] | Experience Lab - Online business creation and development guide for bloggers and startups

Who Actually Created Bitcoin and Who Did not? – CHAPTER[1.5]

Imagine the most popular digital currency, which is advertised through celebrities like Richard Branson, Paris Hilton, Floyd Mayweather, Mik...

Imagine the most popular digital currency, which is advertised through celebrities like Richard Branson, Paris Hilton, Floyd Mayweather, Mike Tyson, Corporate giants like Sheila Bair, Cyber Security legends like John McAfee, TV channels like Bloomberg, platforms like TED Talks and having a net worth of $115 billion dollars as of June 6th, 2018, has an unknown inventor!


The so-called Japanese creator of Bitcoin who mysteriously disappeared in 2010, has the official name, “Satoshi Nakamoto”. He is more like a Jesus-like character for bitcoin community who came from nowhere to "help the humanity against central banks" and gift everyone with a decentralized monetary system owned by none and controlled by none. Surprisingly everyone believes blindly in this fairy tale.

Bitcoin official website says, that inquiring about who was the inventor of bitcoins is same like if you are asking who invented the paper.

They make it look so simple so that the bitcoin users may use the same baseless and illogical statements to discredit anyone who asks who was “Satoshi Nakamoto”. 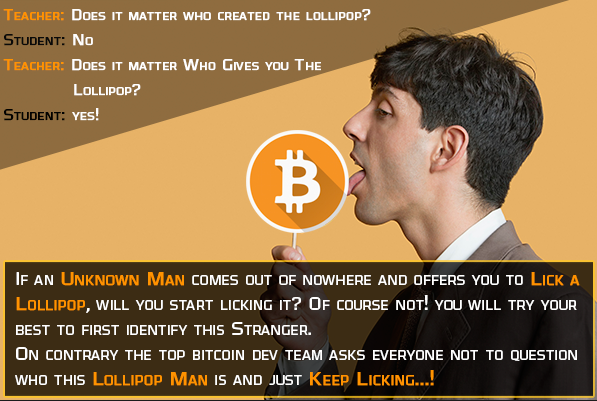 If an unknown man comes out of nowhere and offers you to lick a lollipop, will you start licking it? Of course not! You will try your best to first identify this man.

On contrary the top bitcoin developer team asks everyone not to question who this lollipop man is and just keep licking.. I call it the Bitcoin lollipop logic.

By licking I meant mining and trading of worthless computer bits. By lollipop I refer to Bitcoin and by lollipop man I refer Satoshi Nakamoto.

According to bitcoin community, this lollipop man almost single handedly laid the foundation for the first practical implementation of decentralized blockchain technology, that has taken everyone by surprise worldwide.

Lots of stories revolve around the fairy tale of this mysterious character but none of the stories has enough evidence to prove who exactly is this man.

For the first time online, we are sharing the most comprehensive and detailed research to expose the real identity of Satoshi Nakamoto, along with his rarely seen leaked pictures, public podcasts and videos.

We will also expose the secret security agencies and organizations who funded his research and are responsible for world wide promotion of Bitcoin.

It’s time to end the hunt for Bitcoin creator who has tried his best to remain camouflaged behind the pseudonym: Satoshi Nakamoto.

What does "Satoshi Nakamoto" Means in Japanese?

According to popular yet funny theories, SATOSHI NAKAMOTO could be sly portmanteau of four corporate tech companies: SAmsung, TOSHIba, NAKAmichi, and MOTOrola.

Sounds funny? Indeed it does! because this is how the elites spread deception to keep people confused.

According to some other strange yet interesting theories:

Satoshi is usually a name given for baby boys which means “intelligent, clever, wise” while Nakamoto is a Japanese surname which means ‘central origin’ or ‘(one who lives) in the middle’ . Combining Nakamoto and Satoshi can be loosely interpreted as “Central Intelligence”.

In Japanese, the surname comes before the given name. Thus, a person with surname Yamamoto and given name Sanae is referred to as Yamamoto Sanae. In the name order of English, this would be "Sanae Yamamoto".

The Bitcoin creators might have purposely used the word Nakamoto which is often used as surname by many Japanese people. Because of this tactic anyone with this surname can be doubted to be Satoshi Nakamoto and this doubt only helps Elite’s plan of buying more time to keep people confused and busy while they continue crafting bigger plans.

People Who Claimed To Be Satoshi Nakamoto Are All Paid Actors

Some people in the past claimed to be Satoshi Nakamoto but they all clearly seemed to be paid actors except one innocent man by the name Dorian Nakamoto who was trapped by Bitcoin creator into this mess.

On 14th March, 2014, NewsWeek published an article where one such man who was doubted to be Satoshi Nakamoto, was a 64 year old Japanese American by the name Dorian Prentice Satoshi Nakamoto.

Dorian was suspected to have a libertarian mindset, a background in military engineering, and a love of model trains. He lived in San Bernadino, California, almost 2 blocks away from Hal Finney’s(first person to receive bitcoin transaction and who was in direct contact with Satoshi Nakamoto) home and in the same city where Bitcoin creator(will disclose his original name in a short while) attended Silly Valley cypherpunks meetings.

Dorian was undoubtedly staged into this mess by Finney and Bitcoin creator as you will discover later in this article.

This poor man’s life was completely disturbed thanks to allegations and criminal law suits.

Dorian’s personal identity was used as pseudonym by the Bitcoin creator in order to hide online exploits.

After Dorian’s drama ended, in order to keep media distracted, bitcoin evangelist Andreas Antonopoulos raised over 67 BTC (worth $32,000 at that time) for this Japanese-American as a thanksgiving and was requested not to cash out those coins for three years so that people may not loose trust in BTC. Interesting compensation!

Dorian now enjoys media limelight and is treated no less than a celebrity.

You know what’s more surprising?
This guy just sold out his 67 BTC coins in June 2017, making him $273,000 richer. This news has further shaken the confidence into Bitcoin saga. How long can such crypto currency survive when even people like Dorian has no trust left on it and quickly emptied his digital wallet showing a clear sign of a bubble burst.

In 2016 another funny character came forward and claimed to be Satoshi Nakamoto. Australian entrepreneur Craig Wright gave interview to BBC News in May 2016 and publicly identified himself as Bitcoin creator. If you watch his interview below, you will clearly notice that he is nothing more than a bad actor. I wonder how much the agency and core development team of Bitcoin headed by Satoshi paid him to make such bogus claims.

A programmer is easily identified by the level of intellect (IQ) in his verbal speech but this guy looked nothing more than a good story teller through his verbal expressions, poor eye contact and nervousness in body language. His bold statements conflict themselves.

I wonder how hard it would be for the real Satoshi to show those One Million BTC owned by him or prove ownership of Satoshi’s old electronic accounts or the best would be to make a signature from the first Bitcoin block (Genesis Block) and put the signature out in public rather playing around words like this paid actor.

Craig Wright is probably paid by Gavin Andresen (I will expose him shortly) through the real Satoshi to spread deception and keep mainstream media distracted.

Wait... make sure Craig Wright does not show you those 1.1 Million BTC that he is accused of stealing from a disabled man: Dave Kleman!

Ira Kleiman — acting on behalf of the estate of his brother Dave Kleiman — has sued Wright for more than $10 billion, alleging that Wright stole as much as 1.1 million BTC — worth $10.2 billion at the time the lawsuit was filed — belonging to one of the forensic computer investigator’s companies following his death in 2013.

Before you watch this video also know that Ethereum co-founder, Vitalik Buterin called out Craig Wright as “Fraud” at a two-day Deconomy 2018 conference in Seoul!

Want to know how the real Satoshi Nakamoto sounds and looks like? How a real programmer talks and appear in public? Stay tuned as we disclose that genius in a short while.

These were the internet stories shared by people online to give a justification of who Satoshi is. Now kindly sit back and relax to read the most comprehensive research done on our side in the next chapter to unveil the man behind the mask.