--> 5 Different Bitcoin Forks: Which One Is The Digital Gold? – Chapter[2.4] R[14] | Experience Lab - Online business creation and development guide for bloggers and startups

Bitcoin Is already a Victim of Civil War! When their is no central authority then only the law of jungle prevails. Where people split to... 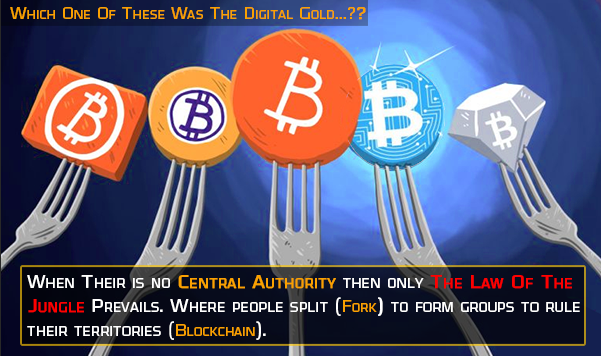 Bitcoin Is already a Victim of Civil War!

When their is no central authority then only the law of jungle prevails. Where people split to form groups to rule their territories. The powerful forms (miners & developers) a monopoly and write new rules and laws, while the users (bitcoin users) have no role except to stand and watch as spectators and follow the whistle blower.

Bitcoin is no more a strong digital currency because just within a year or two, it has been divided into four parts known as Bitcoin Core (BTC), Bitcoin Cash (BTH), Bitcoin Gold (BTG) and Super Bitcoin (SBTC). In 2018, yet another (4th) fork occurred called Bitcoin Private (BTCP).

Announcement of a fifth fork by the name Bitcoin Prime is just few weeks away. In short the count of forking and civil war of words goes on...

Surprisingly you no more have just 21 million bitcoins anymore as each fork creates 21 million coins of its own out of thin air!

Forking has simply killed the confidence in so-called scarcity of Bitcoin and its digital gold fake status.

Perhaps the bigger issue is that these forks(divisions) expose a fatal flaw in the "finiteness" argument of owning bitcoin. While it's true that protocols limit the number of mined bitcoin to 21 million, forking into separate currencies allows bitcoin to move beyond these limits by creating a new currency. Additionally, it's always possible the protocols in bitcoin could be rewritten to allow more mining, meaning it may not be as scarce as you realize.

Forking bitcoin is same like saying “hey folks, I don’t like your version of bitcoin, hence I will split the blockchain to create my own version of a new branded bitcoin!”

The algorithm on which the Bitcoin protocol functioned has been sub-divided (hard forked or scripted) into five different cryptocurrencies all of which are claiming to be the better bitcoin and future currency. Each group of miners is busy in propaganda war against one another while the users have no role but to watch as spectators or show their anger on reddit forums.

Just within a year or two, Bitcoin Core (BTC) (the original bitcoin) has been splitted into four replicas or duplicate sisters known as:

In other words, bitcoin hard forking is creation of a new worthless artificial gold, casted out of thin air. But the answer to the big question that not even a bitcoin user knows is: Which one is the original digital gold out of so many duplicate sisters?

Hard forks is splitting of bitcoin into new cryptocurrencies that happen when a group of bitcoin users/miners/developers decide to make new changes to the blockchain rules and it is practically implemented by sharing a transaction history with original bitcoin blockchain up to a certain date and time, after which the blockchain network splits(forks) into two parts.

The new cryptocurrency that emerge as a hard fork of bitcoin, is technically the same Bitcoin with almost the same design, concept and miningalgorithms except for few changes to the network rules (protocol).

Abracadabra! A new Bitcoin replica is born! For those who migrate to the new Bitcoin (XYZ) chain, for each Bitcoin (BTC) they own, they will get 1 XYZ coin for free!

If you feel like I am kidding, please read it for yourself to find out how funny it gets when crypto-elite fool non-techy users by introducing new replicas of their artifical gold.

Today there are over 18,000 non popular forkes of the original bitcoin code at github repository. It roughly takes less than 2 hours to create a new altcoin under your branded name. You can setup a fancy website, write a whitepaper and promote your ICO all within a month by investing less than $10,000.

That easy is to counterfeit Bitcoin and create your own artificial gold and start selling it to millions of blind sheeps who will buy it and mine it, dreaming of becoming rich oneday...

As a result trust of merchants in bitcoin is decreasing and new adopters are confused where to invest. Low confidence in bitcoin means high volatility and shadowy future.