Reason[11]: Bitcoin Transactions are Slower than Traditional Credit Cards Bitcoin is heavily advertised as the most fastest way to send ... 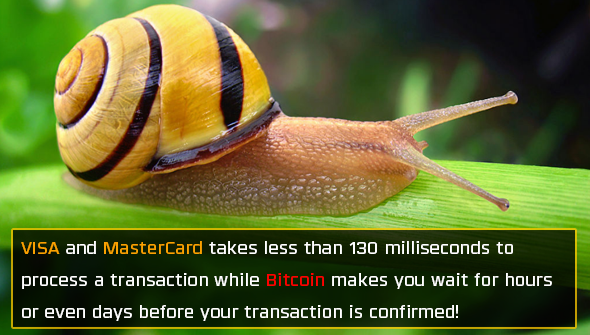 Bitcoin is heavily advertised as the most fastest way to send and receive payments contrary to slow traditional banking methods of wire transfer or credit card payment processing. The truth is just the opposite.


The most advanced virtual currency that is being powered by millions of computers across the globe has become so dead slow in 2017 that sometimes transactions take over three days to settle!

Sometimes transactions take over three days to settle even when people think they’re paying the correct median rate. Bitcoin’s fee market has been definitely getting cryptocurrency proponents frustrated, a sentiment that can be seen in forums and across social media.

When you send bitcoins to an address, you have two options to select. Either pay a considerable amount of transaction fee to the miners, who will then help you process your transaction and get it confirmed fast, or there is the second option, pay no fee and wait in the queue of hundreds of thousands unconfirmed transactions for hours or even days before your transaction is processed to the public ledger.

At the time of writing this article, there are 181557 Unconfirmed Transactions according to Blockchain.info, and that number is still lower due to the weekend lulls.

Bitcoin scalability problem is a serious bottleneck in bitcoins success path and the biggest reason of why the current bitcoin protocol is so inefficient to qualify as currency.

But can you guess how many transactions per second is this bogus electronic currency i.e. Bitcoin capable of handling?

Today the Bitcoin core network is capable of processing a maximum of 7 transactions per second while traditional credit cards like VISA can process over 65,000 transactions per second!
Which means in peak times, a bitcoin user can be forced to wait for hours or even days before his transaction is actually processed. During that time you can travel from Canada to USA, spend a great night there and be back the next day!

How on earth can anyone call bitcoin as currency when it is far slower than a snail compared to traditional payment processors like VISA and MasterCard which takes less than 130 milliseconds to process a transaction while Bitcoin makes you wait for hours or even days!

Reason[12]: Bitcoin Transaction Fee Is Not Cheap But Expensive

Bitcoin was exaggerated to be the cheapest payment system with a transaction fee far less than traditional payment processors. But as time passed and more people have started using it, bitcoin miners have started torturing the users with hours of waiting and expensive transaction fees as high as $52 per transaction (Dec 23, 2017).

Those who do not pay the transaction fees are forced to wait for as long as four days. It can take minutes, hours or even days depending on the amount of bitcoins you wish to send. Transactions having too many inputs (often from small bitcoin users) or larger in byte size are made to wait even longer.

A fund by the name of Pineapple Fund reported that they had to pay a transaction fee of $1,100 in order to push their transactions for processing.

The average median transaction fees today costs around $31-52 USD which is far more expensive than traditional banking wire transfer or a DHL parcel sent from South Asia to USA.

The slow transaction capacity of bitcoin and the high transaction fees frustrated the Shapeshift’s CEO Erik Voorhees so much that he had to tweet this:

When it's cheaper (and sometimes faster!) to FedEx private keys to someone than to send a digital payment, Bitcoin is no longer a P2P electronic cash system.

On Dec 12, 2017, a journalist named Daniel Roberts, tweeted that he paid $15 to send $100 worth of bitcoin from a digital wallet to a hardware wallet. 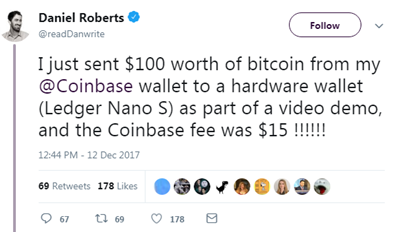 The same month, another person also tweeted complaining that he had to pay a $16 fee to send $25 worth of bitcoin from one bitcoin address to another. 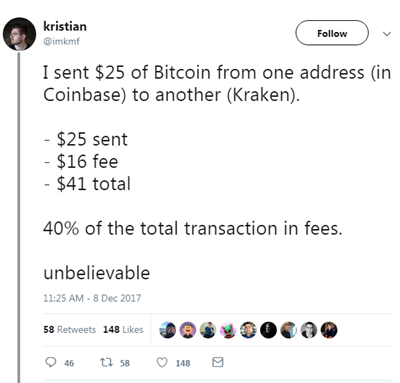 One bitcoin user called larry, was so frustrated that he went into battle with other bitcoin users because he was fed up of paying high transaction fees. Read the testimony from a bitcoin user himself and do read the comment thread here:

Not true. Crypto currencies are the most expensive trade system ever created so far.

This usually runs upward to 20% of your funds by the time it is done.

I can transfer money via bank to anywhere in the world for $1 to $5.

When I transferred $500 to to Kraken last month it cost me $18 in bank fees for the transfer, and $46 for hidden fees that Kraken blamed on the bank despite the banks showing all the transaction fees and times of the transactions.

Please note that only 21 million bitcoins can be mined and the transaction fee is the only method for miners to earn a reward. Miners work out complex cryptographic puzzles to add transactions to the blockchain, without minors the system is dead. If all 21 million bitcoins are mined, the miners will have no option but to increase the transaction fee as a reward for their electrical expenses and to keep the system moving.

Pity Bitcoin whistle blowers could not even live up to their commitments. Such is the currency of the future as they label it. The average Joe will never notice this serious problem because he is busy hoarding his bitcoins and dreaming of becoming a millionaire.