Biggest Myth: Bitcoin is Unstoppable! There is no harm in day dreaming especially when you live in the crypto-world. History always repe... 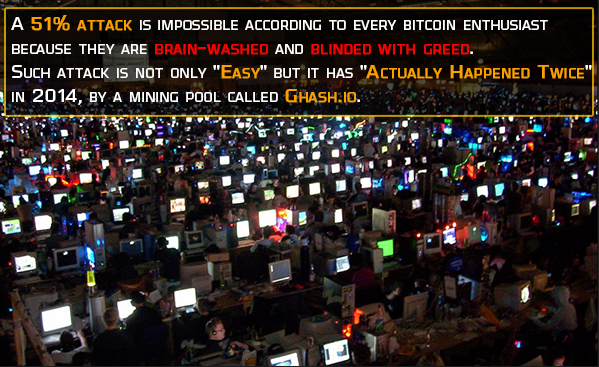 There is no harm in day dreaming especially when you live in the crypto-world. History always repeats itself. A monetary monster can never tolerate another monster in its territory but when it does, its only as per its prescheduled will.

Bitcoin has a lot of security vulnerabilities but I will discuss the most possible one here that even scares Satoshi Nakamoto (Nick Szabo) as he mentioned this possibility 3-4 times in his white paper by saying in the introductory paragraph:

The system is secure as long as honest nodes collectively control more CPU power than any cooperating group of attacker nodes.

The CPU power that drives the bitcoin blockchain, comes from the miners. These miners help to run the system, yet at the same time if all the collective computer power of these miners is combined under the umbrella of strict government regulations through power and force, the bitcoin network can easily be brought under full control.

Every government has extremely skilled and well equipped secret agencies and all these agencies often combine power to achieve a global agenda.

For instance let’s suppose bitcoin is not created by NSA or NSA has lost control over Bitcoin puppets, in such case, can this network survive to keep NSA away? Is bitcoin really unstoppable? Practically and theoretically, NO!

How hard do you think, would it be for NSA to find the world’s biggest Bitcoin mining farms and exchanges and bring them down to their knees by enforcing strict criminal penalties?

But wait! Don’t we already know the list of biggest mining pools (groups of people mining together as a single unit)?

By doing a quick research and thanks to Bitcoin wiki and the raw data from bitcoin network analysis company Blocktrail, you can easily find the list of most popular and largest bitcoin mining companies, their founder names, locations and their computational power. 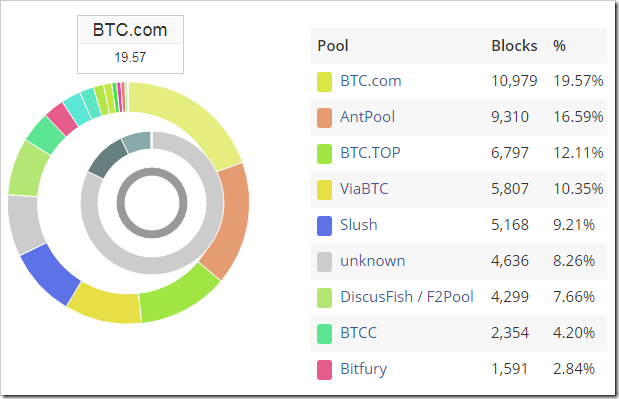 If NSA succeeds (which it is capable of) in controlling more than 50% of the bitcoin network's computing power, then it can easily exclude and modify the ordering of transactions. This allows it to:

Bitcoin community often claims achieving 51% control over the blockchain network is almost impossible because this would require immense amount of computational power. They think such because they have assumed the attack would come from some Hollywood inspired hackers or some young excited Chinese/Russian/Korean hackers or at worst the collaboration amongst different governments.

But they fail to realize that bitcoin mining pools, farms, exchanges and online services all operate from planet earth and so does local intelligence agencies.

Agencies literally don’t have to do much efforts because bitcoin miners are already divided into groups and finding these groups and bringing them to your terms and conditions is just a piece of cake.

“A 51% attack is impossible” according to every bitcoin enthusiast because they are badly brain washed and blinded with greed. Such attack is not only "easy" but it has "actually happened twice" in 2014, by a mining pool called Ghash.io.


Bitcoin currency could have been destroyed by '51%' attack

Bitcoin has stared down an existential threat, after a consortium of miners briefly gained enough processing power to theoretically destroy the currency.

For a few hours on Friday, mining pool Ghash.io controlled 51% of all the processing power being used to perform the calculations that keep bitcoin secure....

.... It's not the first time the "impossible" attack on bitcoin has been scarily close. In January, Ghash hit 45% of the network, and was forced to "take steps" to prevent 51% from being breached.

If a group of miners can easily achieve 51% computational power, its funny when they utter the word “impossible” out of arrogance and ignorance. I guess I have shown enough proof. Show this fact to any bitcoin user, the next time you hear him shout “Impossible!”

What would happen to Bitcoin if 51% attack takes place?

The bitcoin network is free and open and if such an attack successfully takes place, there is no bitcoin authority to stop them from doing so. As a result the likely confidence in Bitcoin as currency would be lost immensely and it’s value would decline rapidly. What would follow next would be a Bitcoin domino effect, of rapidly decreasing bitcoin price, miners quitting the network, bitcoin hoarders selling off their BTC, merchants stop accepting Bitcoin and thus the currency getting devalued to over 95% of its value within weeks!

Bitcoin’s hard Fork (exact replica with few changes) called Bitcoin Gold recently was attacked with a 51% attack in May 2018. Bitcoin Gold confirmed that the attacker had gained majority control of the network’s hash rate and used that control to reorganize the blockchain and reverse transactions!

Guess what happened next?

[yellow]The attacker had sent himself over 380,000 BTG worth over $18,000,000 in a series of transactions consistent with double spending behavior. [Source]

Cryptocurrency is always vulnerable to 51% attack and this is why Nakamoto Satoshi (Nick Szabo) warned about the possibility of such attack in the starting paragraph of his Bitcoin whitepaper.

Such ‘secure’ are these electronic currencies of the future....

I call Bitcoin as the mother of all scams because it has become the role model for people to create money out of thin air and convince thousands of innocent investors to pour their hard earned money into something that is nothing more than just some vulnerable computer code or software to be precise.

Bitcoin’s massive mining hashing rate may sound secure but only for the time being, the mining pools have not come under the influence of secret agencies. It is as per the will of NSA, what has it planned for the future of its sponsored Bitcoin.

51% attack can cause enough panic in the bitcoin ecosystem that people could ultimately stop using bitcoin as currency.