Economists with decades of experience in stocks have always advised this: When you see a taxi driver asking you regarding an investment op...

Economists with decades of experience in stocks have always advised this:

When you see a taxi driver asking you regarding an investment opportunity, know that its a bubble.

Today wherever you go whether it may be a public forum, social media group, restaurant or when you meet an Uber driver, you find people talking about Bitcoin. This is enough a signal to prove how speculation is helping the bitcoin price to rise at an alarming rate. 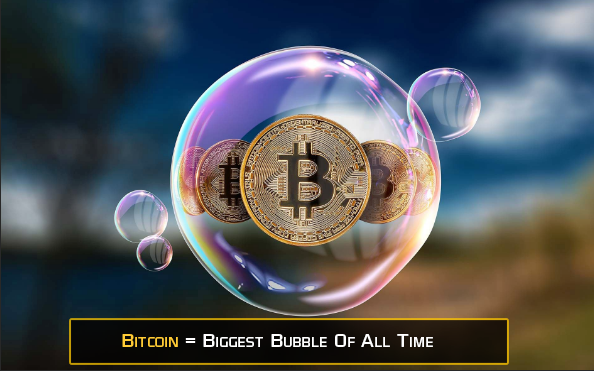 Does this situation remind you of something? You guessed it right: the dot-com bubble of the late 1990s and early 2000s. If not match the greed side of the chart below with that of Bitcoin’s rising prices:

I created the chart below by taking data from Stockcharts.com and Bitcoin.com. Every bubble curve has two sides: 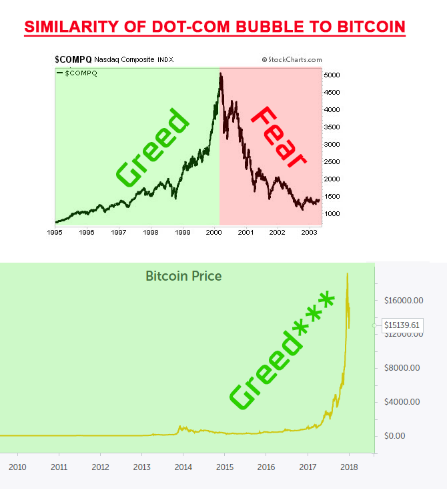 Bitcoin greed curve is far horrible when compared to the Dot-Com bubble. Bitcoin prices has soared by 1,600% just within a year. Bitcoin dropped from $19K to $12K within just 10 days in Dec, 2017. Has the ride for the fear curve started? From what the stats show, 2018 is surely the year of biggest surprise for all crypto-enthusiasts. 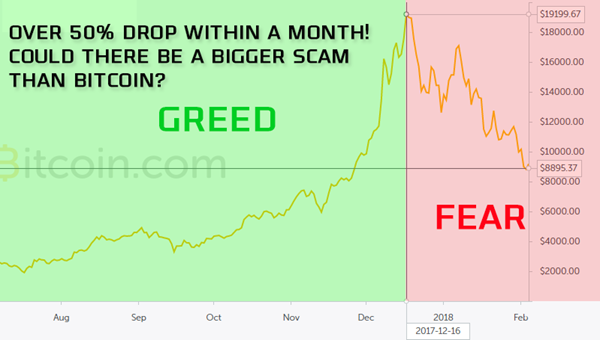 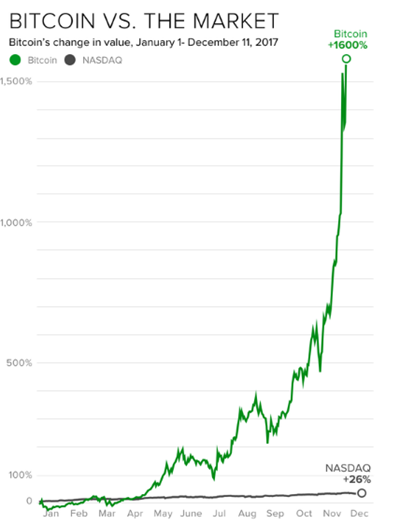 Bitcoin is now officially an investor mania and just like all manias, when it turns, people are going to be wiped out.

This sudden increase in the price of bitcoins have worried reputed investors so much that they have started educating their fan following to be watchful while investing in cryptocurrencies. Atlas Investor founder Tiho Brkan tweeted on Nov 19, 2017 saying: 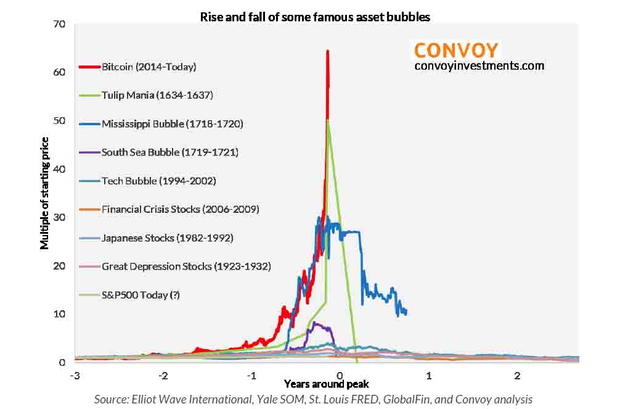 “Bitcoin is rising faster than any asset class we have seen over the last 400 years.

The sharp bull markets including Tech Bubble of the last 90s, US stocks of 1920s, Oil in early 2000s and even the famous South Sea Bubble... do not even come close to the rise in Bitcoin.”

The major different between a bitcoin bubble vs. all past asset bubbles is that, it is the first, absolutely global bubble, accessible to almost everyone: from Wall Street financier to Afghan shepherd, using their smartphone. Once it bursts, it won’t effect one nation or a specific group of startup companies but the entire world as a whole.

Chinese Press has openly started talking about a bitcoin bubble. As soon as 2018 started, China’s People’s Daily published a story saying that the discussion over a Bitcoin bubble is mandatory now.

“The so-called advantages such as scarcity, fidelity, strong liquidity, transparency and decentralization are only disguises for speculation. How come bitcoin price rallied hard in 2017 while it hasn’t made any improvement over the years?”

Even Japan has started considering bitcoin as the worst form of a bubble and not a credible form of currency. Japan Post Bank CIO, Katsunori Sago said in an interview to Reuters:

“Bitcoin is in a bubble and its fair value should be around $100, or about 99 percent below the current level.

The current bitcoin craze is worse than the dot-com bubble in the late 1990s that eventually busted in 2000.

During the information technology bubble, we saw a rally in dot-com company shares. But at least at that time, there were people using Yahoo or (Japanese internet firm) Rakuten -- people were using their services.

But this time, I see quite a lot of people doing crypto-currency businesses in my circle of friends. But I hardly know anyone in person who is trading crypto-currencies and I haven’t seen anyone using them in real life. So in that sense, it’s worse than the IT bubble.”

Believe it or not, Japan has started regretting its decision of considering Bitcoin as a legal method of payment in the country. The former Prime Minister of Japan and now the current Finance Minister, Taro Aso, has offered his strict stance on bitcoin which has shocked everyone. Speaking to Reuters he said:

“There’s no fixed definition on whether it’s a currency or not. This issue is a difficult one…It has not yet been proven to be credible enough to become a currency, so I need to watch [bitcoin] for a little while more.”

“Every so often something like this comes along, every generation gets sucked in.

Often it’s people who don’t know a lot about investing. During the dotcom bubble, at the time the standard response to anyone expressing skepticism was they just didn’t get it. The dot-com shares inflated to excessive valuations, many had [price-earnings ratios] off to infinity but no earnings. This reminds me a lot of that.” 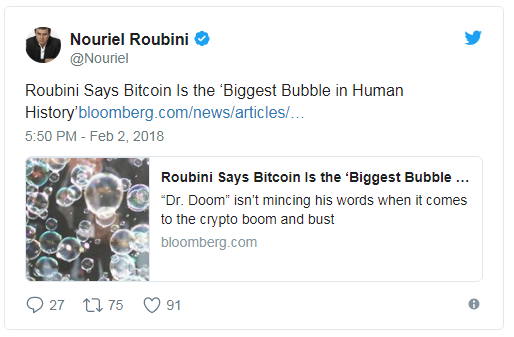 American economist, Nouriel Roubini, who correctly predicted the US housing bubble in 2006, two years prior to the sub-prime mortgage crisis, has recently given interview to bloomberg and has stated that “bitcoin is the “biggest bubble in human history” and this “mother of all bubbles” is finally crashing.

It isn’t just Bitcoin, Roubini added. There are more than 1,300 cryptocurrencies or initial coin offerings, and “most of them are even worse” than the largest digital token. These constitute a “a bubble to the power of two or three,” he said.

Blockchain has “been around for 10 years, and the only application is cryptocurrencies, which is a scam,” the New York University economist added.

In another salvo aimed at crypto bulls, Bitcoin is an “environmental disaster,” he said, citing its soaring energy costs.

Many cryptographers today have finally admitted that the current Bitcoin price rally is not because of actual network expansion but merely due to speculation and people hoarding the coins instead of using it as currency. 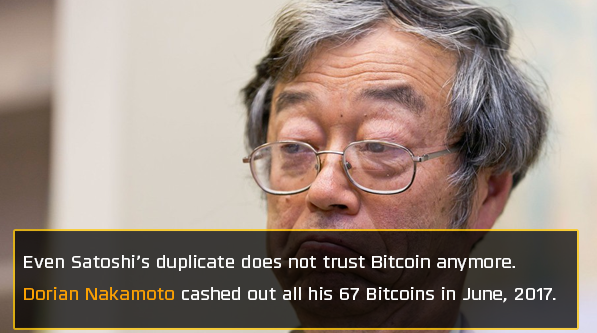 Do You know what’s more surprising?

Dorian Nakamoto who was wrongly identified as being the inventor of bitcoin in 2014 and was donated 67 BTC by bitcoin community has recently cashed out all his 67 BTC in June 2017, making him $273,000 richer. This news has further shaken the confidence into Bitcoin saga. The time is now surely near when more renown people like him will cash out their BTC for fiat paper currency to ring the bells for a total bubble crash.

How long can such a crypto currency survive when even people like Dorian has no trust left on Bitcoin and quickly emptied his digital wallet showing a clear sign of a bubble burst.

Cryptos do surely have an unproven track record and carry a significant high risk of fraud that should cause consumers to be cautious. Those who still wonder if bitcoin is in a bubble or not, are surely living in a fantasy and dreaming

“Keep hoarding, you will soon become the next great millionaire!”

The entire Bitcoin economy which is based on speculation could take less than a month to topple over because it perfectly fits the domnio effect theory. This is well explained technically by a reader on Satoshi Nakamoto’s blog and was acknowledged by Satoshi (Szabo) as something that could possible happen and can not be ignored:

“It's not just deflation against which BitCoin is defenseless. Given the lack of feedback, it is just as susceptible to inflation:

Suppose that mining costs catch up with market price. Then, for some reason, market price falls as people sell off their BitCoins. Some miners stop. Some may even sell their equipment and quit the network altogether. This will not reduce the supply of BitCoin, just makes the system a bit more fragile. Those who stay in the mining business will see their rate of mining increase, and rationally anticipating further fall in prices, will also increase the rate at which they sell BitCoin, fulfilling their expectation.
People with BitCoin savings liquidate, some businesses stop accepting BitCoin.
BitCoin's market price falls further. The limit is zero. No feedback to stop the ensuing inflation caused by the general shrinking of BitCoin economy. More and more BitCoin chasing fewer goods and services (and currencies).
This is what I actually expect to happen after the current bubble bursts.”

To the blind followers of Satoshi Nakamoto, this is what Nakamoto (Nick) replied to Daniel:

“Daniel, that's a good explanation and I agree it makes Bitcoin inflation risks worse too.”

The fear curve of bitcoin bubble will be seen when people start tweeting about selling off their bitcoins on A.S.A.P basis using hashtag #BuyCheapBitcoin.

Just a friendly advice: If you want to survive the bitcoin bubble, keep a close watch on the dollar collapse, FEDcoin and IMF’s policies.