Yes you heard it right, you could not buy your wife a gold ring neither could she wear any gold jewellery. All your gold hoardings now belonged to the Federal Reserve Bank (FED)! 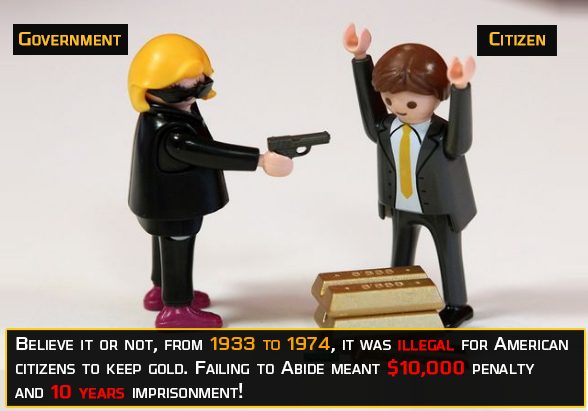 Foreigners living in United States also had their gold confiscated, and were forced to accept paper money for their gold.

Through this unconstitutional executive order, citizens were told to hand over all their gold hoardings to Federal Reserve Bank within 25 days. It was forbidden to hoard gold after May 1, 1933.

Anyone not obeying this law had to face severe criminal penalties of $10,000 fine or 10 years imprisonment or both!

Imagine this 95% devaluation in purchasing power of US dollar since 1933 and how the world has been systemically robbed by these banking elites. 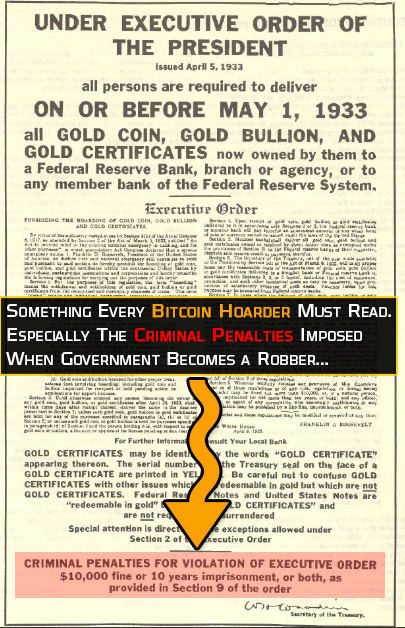 The restriction on gold ownership in the U.S. was lifted after 41 years by President Gerald Ford in December 31, 1974. After which private ownership of gold coins, bars and certificates was made legal.

What FED did with gold hoarders in 1933, what do you think can stop them from doing it with bitcoin hoarders in 2018?

If governments cannot confiscate or tax Bitcoin, they can certainly make it illegal to own or use it. How about a $10,000 fine and up to 10 years in prison if caught holding on to or using Bitcoins?

Bitcoin miners are really not ready or expecting any such severe criminal penalties but if such penalties become a reality, they will not be able to react and they will quickly surrender.

Don’t you believe it..? Then you might not have heard of how South Korean financial authorities have started torturing crypto traders:

Cryptocurrency traders will be allowed to convert their virtual accounts into real-name ones within this month, but those who refuse to accede to real-name identification will face fines.

Can you guess what they mean by face fines? It could be penalties of imprisonment of up to five years or a fine of 50 million won ( $47,000) similar to those fines introduced by South Korea in 2014. Sounds similar to the penalties imposed by Executive Order 6102 of 1933, isn’t it?

Imagine similar penalties being enforced in USA, China, UK, Australia, Russia and Canada? Where could these crypto traders literally hide then?

Don’t governments team up to achieve a mutual goal? It has already started!

Virtual currency is too risky to ignore…We will improve transparency, prevent the spread of speculative transactions, and prevent money laundering.

Bitcoin exchanges and miners in South Korea or around the world have no option but to either surrender or leave the country and hope of not getting bullied by some other country’s financial authorities.

At present many central banks (like China, India and Pakistan) have declared bitcoin as an illegal tender but no government has yet issued any criminal penalty.

You will see criminal penalties come into action once the banking elite unfolds their centralized cryptocurrencies to wipe out bitcoin completely. Bitcoin for them was and will remain just a test dummy to study market behavior and public adoption to a cashless economy.