Can you hack cash aka paper currency? Of course you can’t, same is the case with Bitcoin protocol. You can’t hack electronic cash but you ... 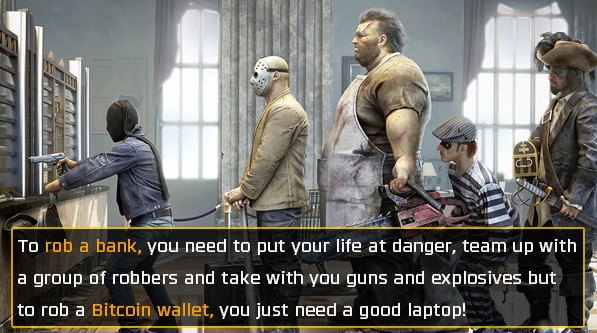 Can you hack cash aka paper currency? Of course you can’t, same is the case with Bitcoin protocol. You can’t hack electronic cash but you can rob a bank or an exchange. Similarly you can’t hack the bitcoin algorithm but you can hack the digital banks (wallets) and exchanges.

The important question to ask here is: Which one is more vulnerable when it comes to security of your wealth: Cash or Bitcoin?

The answer is: Bitcoin is surely the most vulnerable currency ever made in history!

To rob a bank, you need to put your life in danger, team up with a group of robbers and take up guns and explosives but to rob a Bitcoin wallet, you just need a good laptop!
Believe it or not! Just as I was writing, I discovered that on Jan 26, 2018, one of Japan’s largest Tokyo-based digital currency exchange CoinCheck had been hacked, resulting in the theft of $534 million worth of NEM, and making it the biggest cryptocurrency theft in history far bigger than that of MTGOX where $450 million were stolen.

This proves how secure digital currency is. Bitcoin users are undoubtedly constantly subject to theft, scams, and frauds, which is made easier thanks to Bitcoin’s structure and lack of regulation.

Just to give you a bird-view of the popular bitcoin hacks and other cryptocurrency hacks from 2011-2018, I have created the table below to show you the so-called security aspect of cryptocurrencies with facts and figures.

Note: A crypto service is anything that involves cryptocurrencies. It can be a wallet, exchange, marketplace, ICO or even an Investment firm.

My calculator got stuck/hanged when I tried adding up the total amount of money stolen from bitcoin and ethereum community. Wonder if there is any other example of such vulnerable and bogus currency ever created in mankind’s history.

New security bugs are introduced every day and people are not that responsive to keep themselves updated with security breaches and install patches provided on emergency basis by Microsoft.

Meltdown and Spectre are some latest vulnerabilities that are considered as a serious threat to Bitcoin wallets and exchanges. According to these vulnerabilities’ discoverers:

“These hardware vulnerabilities allow programs to steal data which is currently processed on the computer. While programs are typically not permitted to read data from other programs, a malicious program can exploit Meltdown and Spectre to get hold of secrets stored in the memory of other running programs. This might include your passwords stored in a password manager or browser, your personal photos, emails, instant messages and even business-critical documents.”

Vulnerabilities such as Meltdown and spectre could easily be used to steal your passwords stored on a hot wallet or exchange. No matter how encrypted the wallet be, they provide little to no protection against such hacks. According to CoinKorea post:

“The biggest problem is that if an attacker exploits the vulnerability, it can not be blocked by encryption or vaccination.”

Such bugs will never stop coming and the hackers will always be one step ahead of security agencies in introducing new ways. WannaCry Ransomware attack is the recent example which affected more than 300,000 computers, across 150 countries, causing a loss of billions of dollars. And all that happened within a duration of just 4 days!

If a currency is solely based on technology then it is undoubtedly the most vulnerable bogus currency ever created. The next time someone screams “Bitcoin is invincible and can never be hacked!”. Show them this list!