We have discussed how expensive and power consuming are GPUs and ASICs in our last point. Affording those thousand dollars giant mining ri...

We have discussed how expensive and power consuming are GPUs and ASICs in our last point. Affording those thousand dollars giant mining rigs and expensive electricity is surely not in everyone’s capacity. 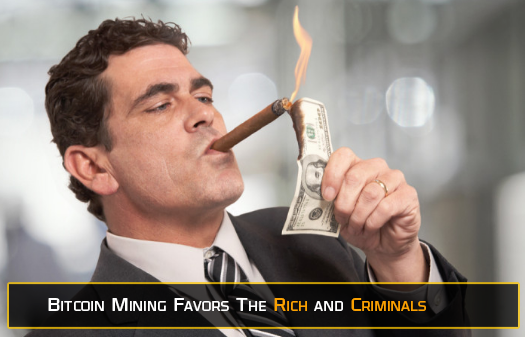 There are only three strong winners in the cryptocurrency world:

The example of ordinary bitcoin users who do mining (having no significant GPUs or ASICs) by participating in mining pool websites (users combine their hash rates to mine as a network) is that of an “Ant” scratching the surface. They hardly earn more than $300 a month and they find them selves in chaos and frustration when their expensive hardware heats up and stops working thus all the money they earn, goes off in paying the repairing cost, currency exchange fees and high electricity bills. At the end of the month he looks more like a looser than a winner. 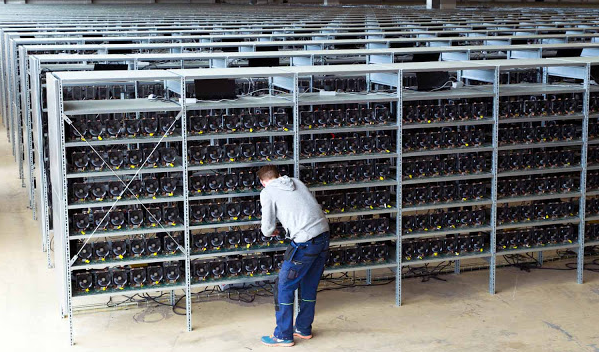 A person selling French fries on a stall makes over $1000 a month at the expense of no hardware malfunction or asset deterioration. Who do you think is more smarter? The ordinary miner who acts as test object to feed the darknet money or the French fries seller who works to feed his family?

There is absolutely no space of participation for the poor or lower middle class. This dark system of electronic currencies is not created or meant for them. They can only participate as test dummies by spending their hard earned money to buy these worthless bits from an online exchange (owned by miners or creators) and hoard them by dreaming that they may become millionaires some day..

Ironically the creators mine up to a million coins using just a general purpose Home PC (just like how Satoshi/Szabo did by mining one million BTC for himself) but the general users are forced to mine the same crypto-coins using expensive GPUs and ASICs.

Mining has increased to such an alarming rate that in 2017, miners purchased 3 million GPUs worth about $776 million. People are mining because the world is still filled with test-dummies.

The creators and wealthy miners, create and mine these worthless bits respectively. They then setup online exchange sites where they tell people that these bits will be of thousands of dollars worth in near future. Due to strong marketing, political influence, advertisement, people get brainwashed and they start buying these useless bits, thinking it’s Digital Gold.

Any Guesses How Expensive Can Bitcoin Mining Get?

One of the largest Bitcoin mines is owned by BITMAIN in Mongolia, China. This giant mine consists of 8 buildings and 25,000 servers in total. Out of which 21,000 machines are dedicated to Bitcoin mining while 4,000 machines mine Litecoin cryptocurrency.

The electricity comes from cheap and environmentally polluting coal power plants, and costing only four cents per KWh. This entire farm with power-hungry mining machines comprising of GPUs and ASICs consume 40 mega watts of electricity per hour, with total electricity cost of $39,000 per day that is around $1 million per month in electricity bills!

The transfer of real money from poor to rich has always remain the same:

None of which (bits or paper) is controlled by the end user, his role in the monetary system is always that of a sheep following the whistle.

Now lets discuss how criminals are the third winners when it comes to Bitcoin mining. 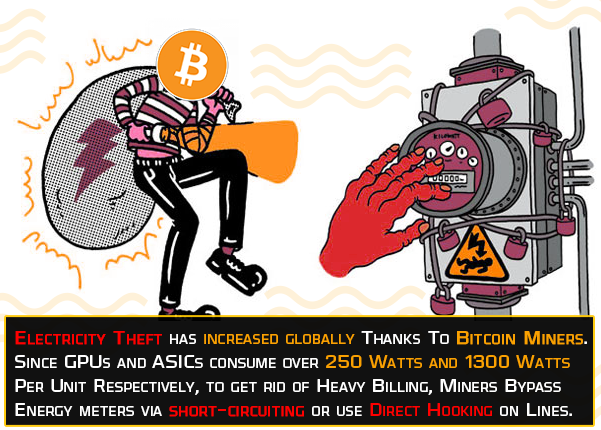 These methods are very popular in Russia, China, India, Brazil and Pakistan. India loses $16.2 Billion annually due to electric theft and now this number has increased globally thanks to theft of electricity by cryptocurrency miners.

An example of one recent electricity theft incidents include the confiscation of 600 Bitcoin mining machines along with 8 high-power fans by Chinese Police in Tianjin city after the local power grid reported abnormal electricity consumption.

According to the Chinese Police, it was the largest power theft case in recent years:

Eight high-power fans were also seized, local police said on Tuesday, adding that it was the largest power theft case in recent years.

The power company monitored recent sudden increases in line loss on one electricity line, up to 28 percent at the peak. The phenomenon is usually closely related with increased load current.

An investigation found that the junction box of the suspected power user's electricity meter had been short-circuited -- a typical way to avoid billing.

Bitcoin mining is a very power-consuming process which mainly depends on high-performance computers. The monthly electric charge of 600 such computers is estimated at hundreds of thousands of yuan (1 U.S. dollar is worth 6.3 yuan).

Five people are under investigation and another has been detained.

Now lets discuss how hackers or website owners hijack your computer or smartphone to mine cryptocurrencies using the new trending method called cryptojacking. 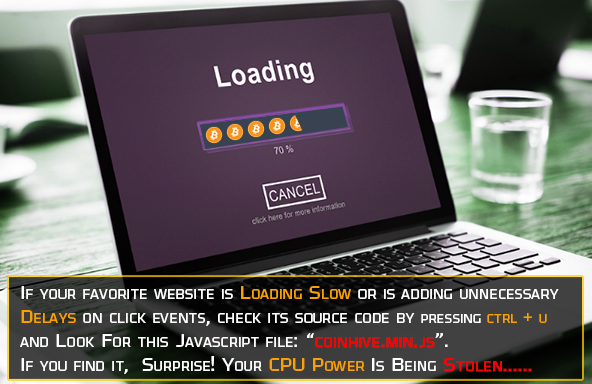 Cryptojacking has become one of the most significant security threats researchers have been facing ever since new cryptocurrencies started emerging following the footsteps of Bitcoin (mother of all cryptocurrencies).

Webmasters who get too frustrated with AdBlocker browser extensions, often add JavaScript Web Miner (such as CoinHive Crypto Minor) to their websites code to use CPU power of their website visitors to mine cryptocurrencies such as Monero.

The coinhive javascript API which is added just below <head> tag of a website template looks like this:

If your favorite website is loading slow or is adding unnecessary delays on click events, check its source code (Press Ctrl + U) to make sure that it’s not stealing your CPU power without your permission.

According to the most latest report published by Bad Packets, over 300 websites have been affected by cryptojacking malware due to a vulnerability in an outdated version of Drupal. Which included websites of San Diego Zoo and the government of Chihuahua.

They tweeted how much CPU power is stolen per user via a screenshot: 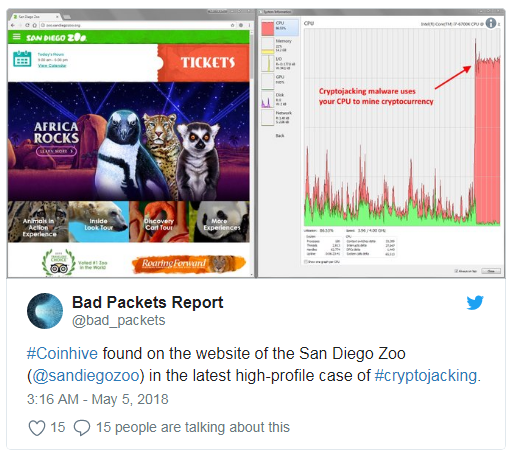 Cryptojacking will likely become a regular source of revenue for website owners who are fed up with Adblockers or AdSense bans.

Thousands of personal computers are attacked on daily basis in large-scale attempts to distribute cryptocurrency mining malware. The hackers often use sophisticated Trojans to infect PCs at large-scale.

According to a press release by Kaspersky Lab, one cryptomining gang mined over $7 million (mostly Monero) within just six months by infecting 10,000 computers with mining malware.

They further said that an estimated 2.7 million users were attacked by malicious miners in 2017.

“They have been falling victims as a result of adware, cracked games and pirated software used by cybercriminals to secretly infect their PCs. Another approach used was web mining through a special code located in an infected web page. The most widely used web miner was CoinHive, discovered on many popular websites.”

“They are mining Monero and using their own custom cryptocurrency miners,”

“And for persistence, they are using sophisticated techniques such as process hollowing and manipulating Windows’ system Task Scheduler.”

Cybercriminals have even used Facebook Messenger to inject mining malware in user smartphones and have also successfully used web miners in YouTube ads. In February, 2018, Tesla’s website was also hacked to mine Monero. It forgives no one!

In short cryptocurrencies were never designed for the welfare of the society or the poor but to make the wildest dreams of the ruthless criminals come true.