A corporate scam like bitcoin can never succeed unless you have a team of corporate influencers on board to promote the cashless agenda by b...

A corporate scam like bitcoin can never succeed unless you have a team of corporate influencers on board to promote the cashless agenda by building trust and credibility in the hearts of people. One such character is cyber security forefather John McAfee.

Yes you heard it right, he is the legendary man who created the first anti-virus “McAfee” which runs on your PCs to this date but unfortunately he is also the most controversial millionaire ever. 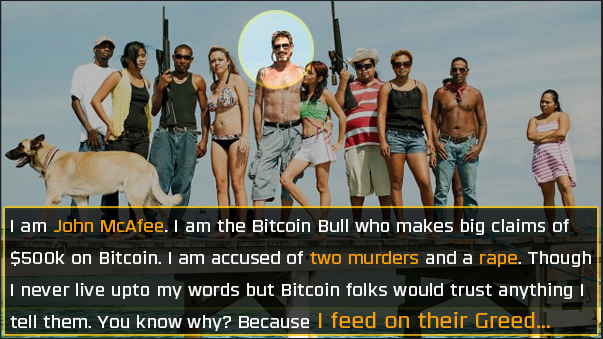 In a documentary Gringo: The dangerous life of John McAfee, directed by Oscar-nominated filmmaker Nanette Burstein, suggests that John McAfee is not only directly responsible for Faull's murder, but also the heinous torture and killing of a Belizian man named Dave Middleton. Gringo also shows an interview with McAfee's former business partner Allison Adonizio, in which Adonizio testify McAfee drugged and raped her following a dispute. More Details here.

Watch the trailer of the documentary below:

No doubt about the contribution of McAfee to the world of tech but after selling his company McAfee Associates, he turned into a man with no morals and ethics. From making false claims of decrypting the iPhone and to reading encrypted messages on WhatsApp. All his claims are proven lies and publicity stunts but this time he has made even a bigger and shameful claim on Bitcoin value.

John McAfee is often seen misleading people by making bold statements on twitter. In July 2017 he said that the price of one bitcoin would jump to $500,000 within three years, and if not then:

"if not, I will eat my d*ck on national television"

To accelerate the greed level of people in a scam like bitcoin, the elite will waste no time to sponsor tweets by influential like McAffee and force him to go below the belt again by doubling his claim of USD $500,000.

During November 2017, when bitcoin price was continuously increasing, McAfee repeated his shameless sponsored predictions and tweeted again on Nov 29, 2017, claiming that Bitcoin price will rise to $1 Million by the end of 2020 and if incase it didn’t he will still eat his d****!

As far as the reality is concerned this is what happened to people who invested in bitcoin in December 2017. Bitcoin price dropped by over 50%... A straight loss of 50% to all those who invested by following fake gods like McAfee.

The start of 2018 had been a nightmare for Bitcoin investors as its price fell from an extreme high of $19,199 on 16th Dec, 2017 to just $8995 on 5th Feb, 2018. Investors have started questioning if Bitcoin is in a bubble because 50% no where seems like a correction. Pity on those who still follow McAfee blindly. 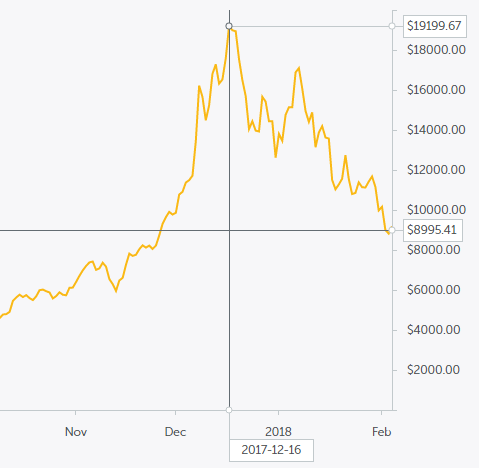 But why is he promoting bitcoin? Even crypto community is now fed up of his lies and you can read details here.

UPDATE: Just when I was writing this chapter, truth came forward itself. McAfee has enjoyed his twitter sponsorships so much that he has now started an ICO marketing service by the name McAfee Crypto Team. Where you can make him promote any scam for a mere $105,000 per tweet. Though the website claims that 90% of orders are rejected as McAfee only promotes products and services that he honestly believes in.. Really.....?

Just recently he promoted an ICO for a group called Pinki Taxi by tweeting: 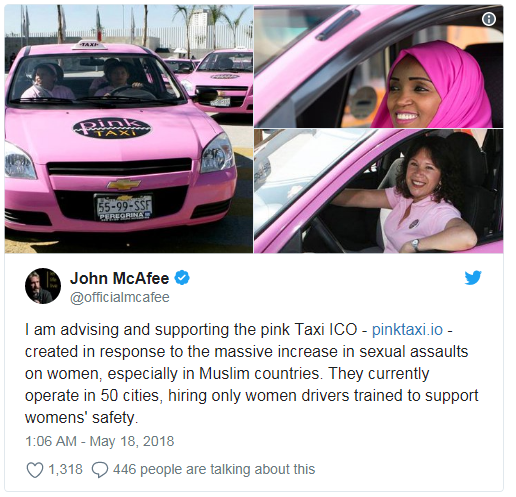 His tweet had over 1300 likes but within next 24 hours someone tweeted this: 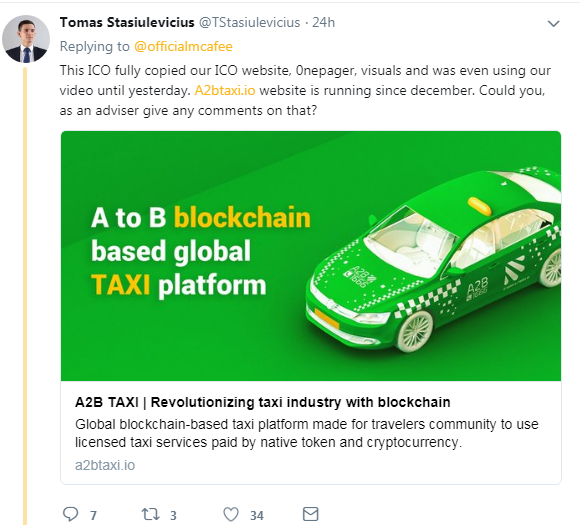 Instead of accepting his mistake, John instead blamed A2B TAXI to be a scam and threatened them to back off or face consequences: 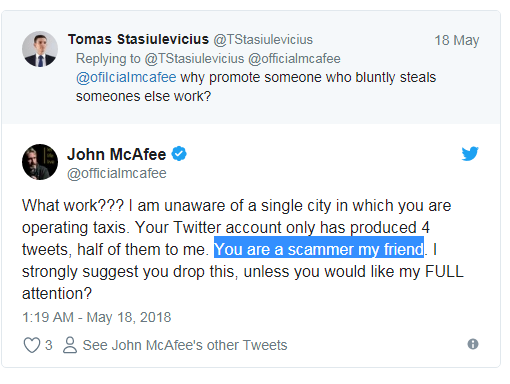 Upon which Tomas replied in disappointment:

And the sad part that he is calling our project scam, which is so unfortunate because a person with that many followers can do terrible damage with this type of statements...

The Pinki Taxi ICO that John was promoting was using A2B TAXI’s whitepaper, same website design and even their promotional video. In other words, John McAfee was promoting a scam and misleading thousands of his followers to invest in this crap.

After both John and Pink Taxi ICO was exposed, John McAfee tweeted this: =) 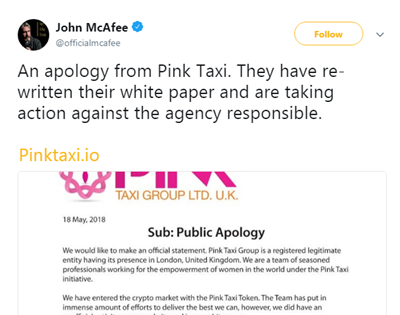 “Just shows you don’t do your research and just promote what you’re paid to promote. Though[t] better of you mate”

As I said, you can pay this man to promote any crap you want and I bet he won’t spare a second to investigate if the ICO is for real or is it just another pump and dump scheme.

The biggest proof of how he turns his back on anything that stops paying him any monetary gain is his video guide against the company that he originally founded and which gave him all the fame and respect in the society. This is how John McAfee belittled McAfee anti-virus software in 2013 by releasing a video entitled “How to Uninstall McAfee Antivirus”.

This four minute ‘ video guide’ includes extensive profanity and also shows McAfee taking drugs, performing vulgar acts and ‘uninstalling’ the software by shooting his laptop. The video is enough proof to show the true character of McAfee, a person of no morals and ethics.

Don’t you agree? Then read this tweet to know why these criminals love cryptocurrencies so much.: 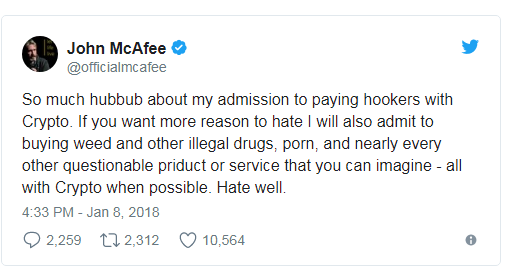 For these corporate giants, their fan following is no different than a flock of sheep.