We have already discussed in Chapter#1 why gold is so precious and why the elites hate Gold Standard so much. I also discussed how gold as ...

We have already discussed in Chapter#1 why gold is so precious and why the elites hate Gold Standard so much. I also discussed how gold as money is far better when it comes to fundamental properties of money when compared to worthless paper currency and Bitcoin. Here we will prove further why a crypto-lollipop can never be a digital gold on technical grounds. 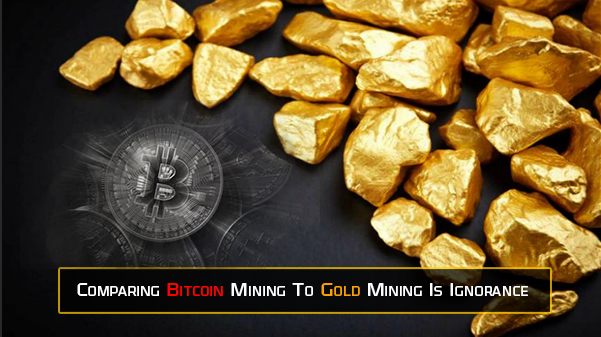 Nick Szabo, the Bitcoin founder, whose pen name is “Nakamoto Satoshi ” shared the Bitgold concept in 2005 on his blog and then implemented his concept into a working protocol in 2008 under the new brand name of “Bitcoin”.

Nick Szabo tried his best to replicate gold digitally and give Bitcoin the features similar to that of gold. But he failed badly. The two fundamental features are:

Note: Properties such as fungibilty, durability, divisibility, intrinsic value, store of value, unit of account and medium of exchange have already been discussed in Chapter#1 and also in different sections of Chapter#2, please refer them for details.

The misleading “digital gold” terminology spread like wild fire thanks to strong media marketing and lobbying by bitcoin creators and financers.

Surprisingly today every brainwashed bitcoin user thinks that these worthless computer bits are actually better than gold because this is what they hear day and night from those thousands of influencers (mostly paid by miners and crypto creators) that they follow.

No doubt Bitcoin has a limited supply of 21 million coins but can this artificial scarcity which lacks an element of surprise and desire compare to the natural scarcity of gold?

Confused...? Let me expose this fake digital gold trickery by discussing the crucial difference between gold mining and bitcoin mining.

Question: How much gold is left to be mined?

Question: How much bitcoin is left to be mined?

Question: How much gold is mined every minute?

Answer: No one knows that.

Question: How much Bitcoin is mined every minute?

Did you feel something? There is no element of surprise in the Bitcoin world. How many bitcoins are mined per second, per minute, per month and how many will be mined for next 10 years. You know almost everything due to Bitcoin’s prescheduled algorithm.

In layman terms, Gold mining is a natural activity that fluctuates relative to the market response. When gold prices increase, miners invest more time and resources to dig harder to find more gold, but when gold prices fall due to increased supply, miners decrease their mining activity or stop mining.

On contrary Bitcoin mining is an unnatural activity that remains absolutely constant to market response, no matter whether BTC prices go up or go down. Irrespective of whether bitcoin miners increase or decrease their computational capacity, bitcoins will keep coming at the rate of 12.5 BTC every 10 minutes or 1.25 BTC/min as of 2017. 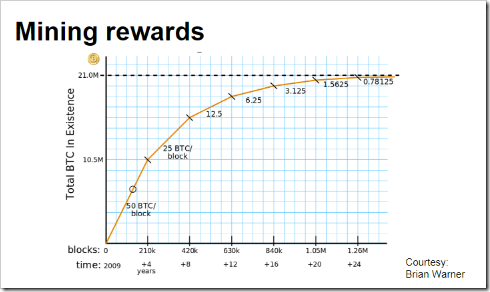 Bitcoin is designed such that every 10 minutes a new block is added to the blockchain and the miner is rewarded some bitcoins. The mining reward halves every four years at a fixed rate.

No matter how much ups and downs come in Bitcoin price market, surprisingly the rate at which bitcoin emerge is near constant, it never changes!

Thus making bitcoin mining an unnatural activity which is by no means similar to gold mining.

Can any sane human now call bitcoin a digital gold?

Who does the bitcoin system benefit in the end? Obviously the rich. Let me explain.

When the rate at which bitcoin emerge remains constant and BTC price remains high thanks to speculation than more miners will join in thus leading to ever increasing hash rate and more power-hungry machines being used.

Only those miners will be able to mine more and make profits who can afford expensive ASICs and electricity costs. Due to this greedy hash-race where you have to keep spending more on hardware for the same bitcoin reward, small miners often suffer when their expenses surpass net profit, thus forcing them to either sell off their equipment or quit the network.

Thus the entire bitcoin economy is designed such that it only favors the rich at the end while the ordinary users only act as ants feeding the system.

In gold mining, every miner has equal right of participation and a miner has the freedom to decide when to pause or resume mining depending on market response unlike the greedy bitcoin mining which never stops at all.

Bitcoin is already suffering through internal inflation where transaction fees are sky rocketing and transaction time is getting slower. Its prices are so deeply dependent on speculation and “greater fool theory” (titled by Bill Gates) , that can loose 50% of its value within a month ($20k in Dec 2017 while 10K in Jan 2018), in other words a 50% inflation just within 30 days!

Such abnormal behaviour is never seen with Gold throughout its 5,000 old history. Thus comparing worthless computer bits to gold and calling it deflationary in nature is pure ignorance.

Billionaire Charlie Munger, (VC of Berkshire Hathaway and partner of Warren Buffet) in an interview to CNBC in May 7, 2018, went really hard on Bitcoin by calling it a worthless artificial gold and comparing it to trading turds: 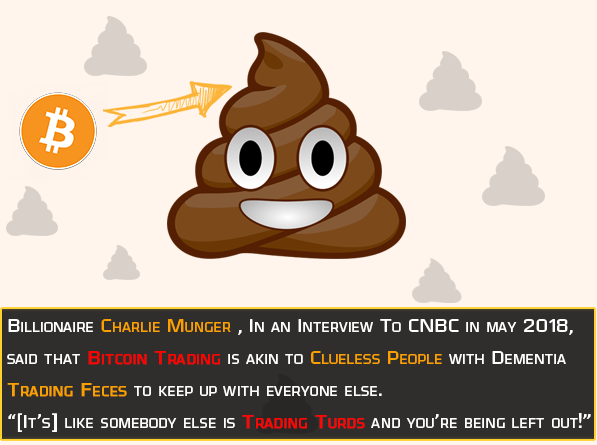 “That is not something I think the world needs. The fact that it’s clever computer science does not mean it should be widely used, and that respectable people should encourage other people to speculate on it. Bitcoin reminds me of Oscar Wilde’s definition of fox hunting:'The pursuit of the uneatable by the unspeakable.'”

“I like cryptocurrency even less than Warren does ... to me it's just dementia.” And a bitcoin trading desk is “like somebody else is trading turds and you're being left out.”

Question: Can you make 100% exact replicas of gold with same density, color and properties?

Answer: That is impossible to do achieve even using the best of 21st century science and technology.

Question: Can you replicate Bitcoin? Can you counterfeit Bitcoin protocol features, attributes, blockchain and design?

Answer: Of course you can! Even a 13 year old kid can do that with a click of a button!

As we already discussed in the Bitcoin hard forking (civil war), just within a year or two, Bitcoin Core (BTC) (the original bitcoin) has been split into four replicas known as:

The first popular hard fork that split bitcoin happened on 1st August 2017, resulting in the creation of Bitcoin Cash (BCH). Every forked bitcoin cryptocurrency claims to be the better bitcoin with far better features and security and everyone of them claim to be a digital gold.

In other words, bitcoin hard forking is creation of a new worthless artificial gold, casted out of thin air. But the answer to the big question that not even a bitcoin user knows is: Which one is the original digital gold then...?

Hard forks is splitting of bitcoin into new cryptocurrencies that happen when a group of bitcoin users/miners/developers decide to make new changes to the blockchain rules and it is practically implemented by sharing a transaction history with original bitcoin blockchain up to a certain date and time, after which the blockchain network splits(forks) into two parts.

The new cryptocurrency that emerge as a hard fork of bitcoin, is technically the same Bitcoin with almost the same design, concept and mining algorithms except for few changes to the network rules (protocol).

Abracadabra! A new Bitcoin replica is born! For those who migrate to the new Bitcoin (XYZ) chain, for each Bitcoin (BTC) they own, they will get 1 XYZ coin for free!

If you feel like I am kidding, please read it for yourself to find out how funny it gets when crypto-elite fool non-techy users by introducing new replicas of their artificial gold.

Today there are over 18,000 non popular forks of the original bitcoin code at github repository. It roughly takes less than 2 hours to create a new altcoin under your branded name. You can setup a fancy website, write a whitepaper and promote your ICO all within a month by investing less than $10,000.

That easy is to counterfeit Bitcoin and create your own artificial gold and start selling it to millions of blind sheep who will buy it and mine it, dreaming of becoming rich one day...

For reasons above, comparing bitcoin mining to gold mining is thus pure ignorance and the same trickery used by the elite to fool the layman.