Reason[40]: Bill Gates calls Bitcoin a ‘Greater Fool theory’ type of Investment People who are respected in the society today for their... 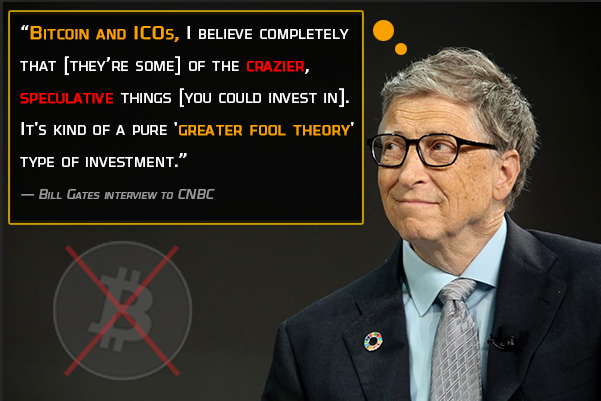 People who are respected in the society today for their services and achievements, make sure never to misguide their followers when asked for their opinion on something.

Bill Gates is one such example of a humble human being, whose high intellect has blessed the world with hundreds of innovative products that we use today at our homes, schools and offices.

Bill Gates whose net worth is $91.7 billion, is well informed about the speculative side of bitcoin and he openly discourages people from investing their money on worthless cryptocurrencies like Bitcoin and also the ICOs, both of which according to him are worthless (produce nothing), crazy speculative investments that a person profit from by pawning his holdings off to a “greater fool” than himself.

“As an asset class, you're not producing anything and so you shouldn't expect it to go up. It's kind of a pure 'greater fool theory' type of investment,”

“Bitcoin and ICOs, I believe completely that [they’re some] of the crazier, speculative things [you could invest in],"

Bill Gates also added that someone once gave him some Bitcoin as his birthday gift, but he sold it a few years afterward. Probably because he was not stupid to keep them.

Bill Gates is so confident of the speculative nature of Bitcoin that he said he would certainly bet against it if he could.

"I agree I would short it if there was an easy way to do it," Gates said.

Bill Gates is also well aware of the evil side of cryptocurrencies that we have emphasized greatly throughout our research.

Do I have to saying anything else? Wisdom says that when a human is brain washed, his mind becomes the devil’s workshop. This is the reason why when someone trys to awake others from these cryptocurrency and ICO scams and frauds, he is attacked with profanity by the crypto-community.

Wake up and open your eyes and think with wisdom. Make up a decision before you suffer a huge lose both financially and spiritually.

Reason[41]: Edward Snowden: “Bitcoin by itself is Flawed”

Former CIA employee and NSA contractor Edward Snowden in an interview at 'The Internet Engineering Task Force 93', openly talked without any hesitation on Bitcoin’s security flaws and its vulnerable protocol weaknesses. 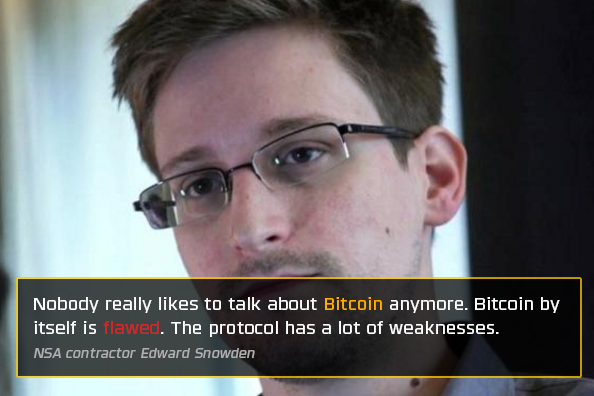 He answered questions after a showing of CITIZENFOUR at the IETF93 meeting; this is a transcript of the video recording.

“Nobody really likes to talk about Bitcoin anymore. There are informed concepts there. Obviously, Bitcoin by itself is flawed. The protocol has a lot of weaknesses and transaction sides and a lot of weaknesses that structurally make it vulnerable to people who are trying to own 50 percent of the network and so on and so forth.”

he proceeds on and then says..

“But focusing too much on Bitcoin, I think, is a mistake. The real solution is again, how do we get to a point where you don't have to have a direct link between your identity all of the time?”

Remember he was the man who openly exposed the true face of NSA and informed the world about NSA’s evil intentions. If this man calls bitcoin as flawed and a waste of time, then what else is left.

To understand what he meant by “trying to own 50 percent of the network”, click here.

Does a philanthropist, business magnate and investor like him really need introduction?

Warren Buffet is globally known to be the most successful investors in the world, who is the second wealthiest person in the United States, and the fourth wealthiest in the world, with a total net worth of $76.9 billion.

In 2014, just after bitcoin hit an all-time high, Warren Buffett in an interview to CNBC openly warned everyone against investing in Bitcoins and considered its intrinsic value to be a joke:.

Stay away from it. It's a mirage, basically. The idea that it has some huge intrinsic value is just a Joke. — Warren Buffet on CNBC 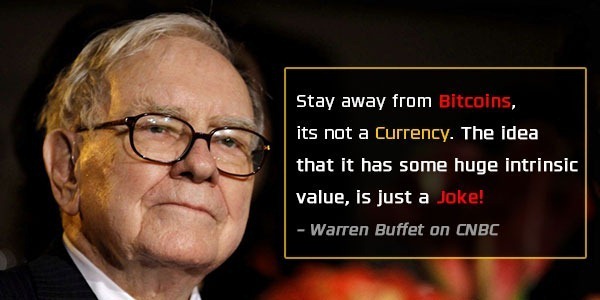 Just after this statement the bitcoin fanatics started making fun of buffet and mocked him to be an out-dated white guy or hater of bitcoin. Surprisingly as experience speaks louder than just words, bitcoin lost more than 80% of its value within the following year. Falling drastically from more than $1,000/BTC in December 2013 to about $200/BTC in January 2015.

At this time it was too late for bitcoin enthusiasts to react and most of them had lost thousands of dollars due to their greed.

In another interview to CNBC, Warren buffet openly claimed that bitcoin is not a currency:

It is not a currency.
I wouldn’t be surprised if it is not around in 10-20 years.
Bitcoin does not meet the definition of currency because people say I will sell you
goods in bitcoins but they change the price of those every time the price of the dollar changes in relation to bitcoin. They are pricing-off the dollar.

Suppose they say I will sell it to you in barrel of oil, but every time the price of oil changes, they change the number of barrels. Your oil is not the currency.

The same man who has taught half the world on how to invest carefully is now being mocked as "outdated white guy" by bitcoin community driven by greed. Greed makes one both blind and arrogant.

No reputable man will ever support a scam or a lie. Several Nobel prize winners have come forward to protect investors from a scam like bitcoin.

Nobel prize-winning economist Joseph Stiglitz recently stated that bitcoin should be banned/outlawed during a Bloomberg television interview. He said that bitcoin serves no useful function — Other than it is used primarily for illicit purposes such as money laundering and tax evasion.

He has condemned Bitcoin as

“Bitcoin is successful only because of its potential for circumvention [and] lack of oversight,”

He believes “Bitcoin is a bubble, and it will give a lot of people a lot of exciting times as it rides up and then goes down.”

He also proposed that if bitcoin is regulated it will seize to exit:

"My feeling is that when you regulate it so that you couldn't engage in money laundering and all these other things, there would be no demand for bitcoin," he said. "So by regulating the abuses you are going to regulate it out of existence."

According to him, bitcoin price is going to go way up, but “will reach a 1929 eventually.” He said that “Bitcoin will crash but won’t go to zero, it just will come down.”, similar to our prediction of $100 or below.

Shiller received the Nobel Prize in Economics in 2013 for his work in “Trend spotting in asset markets”. He is no ordinary guy as his popularity is partly derived from his correct prediction of both the dot-com and the housing bubble, as he published books titled “Irrational Exuberance” detailing these crashes.

At a conference in Vilnius, Lithuania, Shiller stated:

“Bitcoin, it’s just absolutely exciting ( …) You’re fast. You’re smart. You’ve figured out nobody else understands. You’re with it. And bitcoin has this anti-government, anti-regulation feel. It’s such a wonderful story. If it were only true...”

His statement is similar to how we explained the Satoshi Nakamoto fairy tale.

The third Nobel prize-winning economist, Richard Thaler recently informed everyone about a confirmed Bitcoin bubble that will take everyone by surprise.

"I can see that there is a bubble in the debt markets, with interest rates close to zero or even negative, and even in the indices, which are at record highs. But the market that to me most looks like a bubble is that of bitcoin and its sisters. "

He also said that the cryptocurrency ecosystem is acting irrationally. “Companies are adding ‘blockchain’ to their name and their value goes up,” he said. “It doesn’t make sense that it keeps going like this.”

As an example, he pointed to Long Island Iced Tea’s shares surging over 300% following a blockchain rebrand to Long Blockchain Corp.

When the most trusted of the society come forward to protect people from investment into a scam like bitcoin, this is how the bitcoin community (driven by greed/ignorance) greets them:

Now Imagine how will I be honored after publishing this research.. =)

Nothing pleased me more than the recent testimonies of founding PayPal CEO, Bill Harris which in other words summarizes my entire research. When I am busy writing this research paper, Bill Harris already took a step ahead and openly declared Bitcoin as the greatest scam in history.

In a blog post published by Bill Harris on recode on 24th April, 2018, he mentions:

In my opinion, it’s a colossal pump-and-dump scheme, the likes of which the world has never seen. In a pump-and-dump game, promoters “pump” up the price of a security creating a speculative frenzy, then “dump” some of their holdings at artificially high prices. And some cryptocurrencies are pure frauds. Ernst & Young estimates that 10 percent of the money raised for initial coin offerings has been stolen.

The losers are ill-informed buyers caught up in the spiral of greed. The result is a massive transfer of wealth from ordinary families to internet promoters. And “massive” is a massive understatement — 1,500 different cryptocurrencies now register over $300 billion of “value.”

It helps to understand that a bitcoin has no value at all.

Promoters claim cryptocurrency is valuable as (1) a means of payment, (2) a store of value and/or (3) a thing in itself. None of these claims are true.”

“Cryptocurrency is best-suited for one use: Criminal activity. Because transactions can be anonymous — law enforcement cannot easily trace who buys and sells — its use is dominated by illegal endeavors.”

It might surprise you that PayPal was amongst first companies to accept Bitcoin as a means of payment but even PayPal is now regretting its decisions. PayPal's current CFO said that Bitcoin is too volatile and their merchants are no more interested in accepting cryptocurrencies.

"Because of the volatility of the cryptocurrencies,"

"You could have something that appeals to consumers, but if merchants don't accept it[bitcoin], it's of little value," Rainey said. "Right now, we don't see a lot of interest from our merchants. But if it's something that stabilizes in the future and is a better currency, then we'll certainly support that."

"If you're a merchant and you have, let's say, a 10 percent margin on a product that you sell and you accept bitcoin, for example, and the very next day it moves 15 percent, you're now underwater on that transaction,"

"So what happens, or what was happening, is they were immediately moving that to a more stable currency,"

Even a %1 volatility in Forex or Gold market can create panic worldwide while surprisingly over 15% volatility in Crypto market is just a normal day business routine for bitcoin worshippers.

I am extremely pleased to know that there still exit some people in corporate world, who warn small investors not to waste their life savings or retirement funds in such pump and dump schemes.

After reading Bill’s views on bitcoin, I was proud of what I had written so far.