An ICO is the best example of not only an exit scam but also of a wolf in lamb’s clothing . Nick Szabo ( Nakamoto Satoshi ) did not onl... 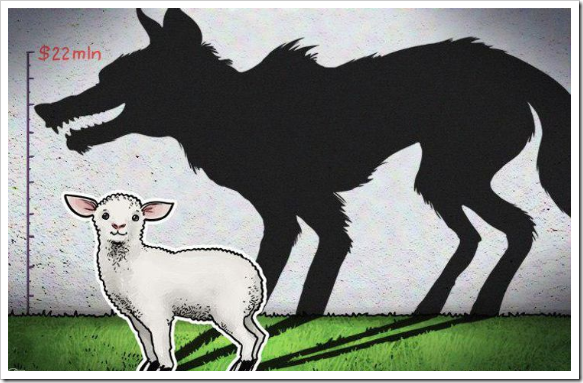 An ICO is the best example of not only an exit scam but also of a wolf in lamb’s clothing.

Nick Szabo (Nakamoto Satoshi) did not only create the first P2P electronic currency that made anonymous and unregulated transactions a possibility and but he also inspired thousands fraudsters to use his open source Bitcoin code to create a new cryptocurrency in less than 2 hours and then use the ethereum network to run an “Initial Coin Offering (ICO)” crypto-crowdfunding campaign and sale these worthless cryptocurrency tokens for millions of dollars to non-techy investors!


For those who don’t know what ICO is:

An initial coin offering (ICO) or initial currency offering (derived form initial public offering (IPO)) is a means of crowdfunding centered around cryptocurrency, which can be a source of capital for startup companies.

In an ICO, a quantity of the crowdfunded cryptocurrency is sold to investors in the form of "tokens", in exchange for legal tender or other cryptocurrencies such as bitcoin or ethereum. These tokens are promoted as future functional units of currency if or when the ICO's funding goal is met and the project launches.

At the time of writing, there are over 18,000 forkes of the original bitcoin code at github repository. To create your own cryptocurrency, you can simply use the bitcoin code or the Litecoin code (a compressed/optimized bitcoin fork).

The steps of creating your own cryptocurrency are extremely easy if you know some basic C++ and know how to handle compiler errors and fix them. This is what fraudsters do:

By spending less than $10,000, fraudsters have made millions of dollars in profit through ICO exit scams.

Over 80% of all ICOs are pump and dump schemes because there is no regulatory body or intermediary involved, thus leaving investors at the mercy of clever scammers.

People who want to become rich quick often fell a prey to these scammers. Crypto-enthusiasts have gone so blinded with greed that they will put their money in anyone’s hand if he can promise to make them rich, irrespective of whether the promisor is credible or not.

To give you an example of how stupid could people get, read about PonziCoin.

Recently in Feb 2018, someone created PonziCoin as a joke and social experiment. The website had publically mentioned (by leaving signs) that it was a scam because its whitepaper was linked to a PDF uploaded on “U.S Securities and Exchange Commission (SEC)” website entitled as “Investor alert: Ponzi Schemes using vitual currencies”!!

PonziCoin source code was available for download on this github link which reads “A Social Experiment Pyramid Scheme.”!!

Wait it does not end here... The whitepaper summary image shown on PonziCoin website which clearly depicted a pyramid scheme, will shock you even more.. However driven by ignorance and greed, all these clear signs didn’t stop the blind crypto-investors from buying PonziCoin tokens. In total, an ICO, which openly admitted to being a scam, raised over $250,000!

Guess what happened next?

PonziCoin founder shocked at the stupidity of people, shutdown the website and ran away with over 75% of $250,000 of investors money! 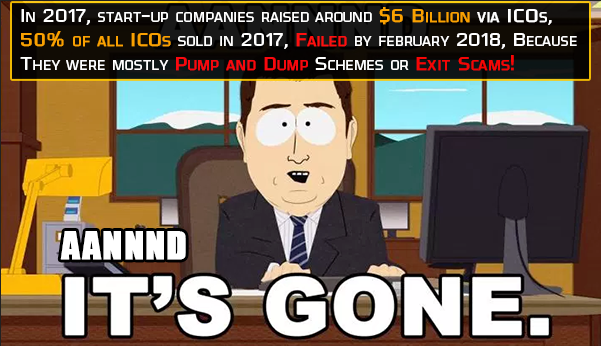 According to the contract, investor could sell his PonziCoins back to the Smart Contract for 1/4 of the current price. Even if all investors ask for a refund, the founder will still own 3/4 of the crowdfunding money.

The founder said he didn’t stole anything nor run away and instead blamed the investors for their stupidity and advised them to be careful next time. I believe the founder was right as far as the ethereum smart contract says! :)

Moral: If you really want to make money by trading turds, an ICO is all you need!

Some worth mentioning ICO exit scams are the following:

According to Cointelegraph, companies raised around $6 billion via ICOs in 2017 but around 50% of all those ICOs sold in 2017 failed by February 2018!

ICOs increased so significantly in 2017 (50 ICOs a month), that financial authorities started warning their citizens about the risks involved by investing in unregulated virtual currencies.

In an interview to CNBC, founder of Wikipedia, Jimmy Wales said:

“..there are a lot of these initial coin offerings which are in my opinion are absolute scams and people should be very wary of things that are going on in that area.”

ICOs bubble has grown so big since 2017 that companies like Facebook, Google, Twitter, Mailchimp, LinkedIn, Chinese Search Engine Baidu, Russian Search Engine Yandex and platforms like Chinese Weibo and Japanese Line has banned ICO and cryptocurrency advertisements on their platforms in order to protect their customers against cryptocurrency scams and frauds.