Reason[45]: Online Retailers Have Stopped Accepting Bitcoin Online retailors who once joined the Satoshi revolution and pledged to support...

Online retailors who once joined the Satoshi revolution and pledged to support this payment system are now forced to step back and reconsider their decisions.

Only three of top 500 online retailers are accepting bitcoin. Merchants are now reluctant to accept bitcoin as a payment method due to its scary volatile price and high transaction fees. 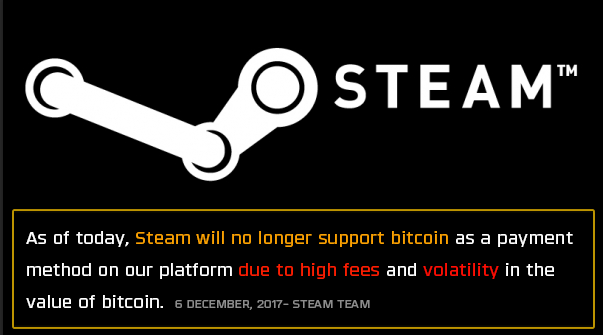 Steam started accepting bitcoin in April 2016 but just within a year, it could not resist to accept the fact that bitcoin surely does not qualify to be called a currency.
In a blog post, Kurtis Chinn, an engineer at Steam, wrote,

"As of today, Steam will no longer support bitcoin as a payment method on our platform due to high fees and volatility in the value of bitcoin.

Note that Steam is the world's biggest gaming service, with 67 million monthly active players. It is the biggest competitor of Sony’s PlayStation Network which has 70 Million users.

With giant retailer's like Steam ending its support for Bitcoin means, the domino effect is yet to start and the fear curve of Bitcoin bubble is approaching far quicker than our estimation of 2018.

It does not end just with Steam! Year 2018 has become a nightmare for crypto lovers as Microsoft has also stopped accepting bitcoin deposits from Dec 26th, 2017 onwards. 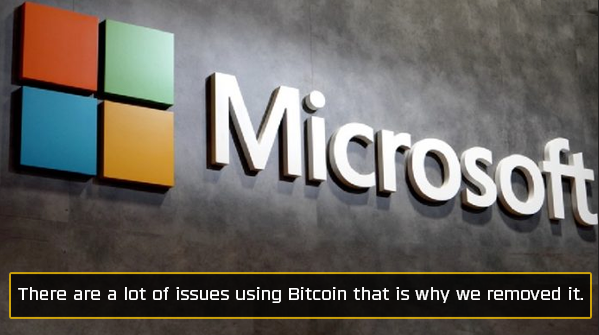 On a live chat with bitcoin team, a Microsoft employee said:

“ From December 26, 2017 onwards, Microsoft is no longer accepting Bitcoin in exchange for credit on the customer’s account. The “Redeem bitcoin” link on Account.Microsoft.com has been removed, so customers like you will no longer see the option. Previous redeem error information has been removed from this post.”

When asked why was Bitcoin removed from Microsoft payment options? The employee replied:

“There are a lot of issues using Bitcoin that is why we removed it.”

By a lot of issues he meant slow transactions, price volatility and high transaction fees as we have already discussed that are popular reasons why Bitcoin does not deserve to be called a currency but rather a corporate scam that is gradually getting exposed day by day.

If you read the comment thread on Bitcoin news blog, you will see the frustration of bitcoin users and what problems are they facing:

Fees are a problem can't use bitcoin to buy goods with online stores way to expensive. Most people are already put off with the use of bitcoin. Business will slowly cancel this payment option. The miners are getting greedy so not really a genuine system for the people.

This is not good. Last couple of weeks I've seen only things like those. Steam, MS, different universities....Not good! A sign that BTC can't be trusted to do business because of the God damn volatility, that includes exponential price increases that most of the BTC users cheer about.

If giant companies like Steam and Microsoft does not trust Bitcoin as currency anymore, its high time to wake up and inform all your loved ones to protect their hard earned cash from this biggest cryptocurrency scam ever seen in economic history.

No reputable company accepts bitcoin as currency, not even Starbucks! 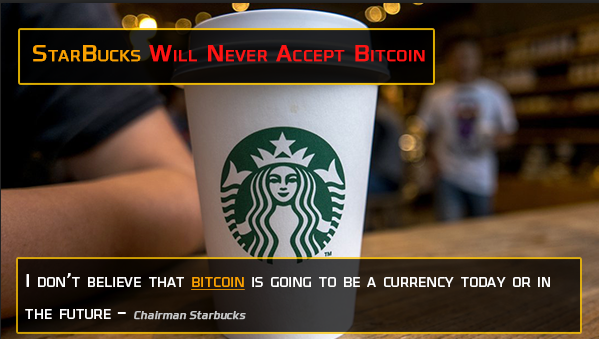 Bitcoin community is a world of lies where each influencer tries to convince its users that Bitcoin is Gold and you can buy anything with it. Whilst the fact is that you can’t even buy a cup of Coffee using Bitcoin.

Just recently on a conference call, Starbucks Executive Chairman Howard Schultz openly expressed his views about Bitcoin and said that Bitcoin is not a “legitimate” currency.

“20 or so years later, and the question is... do you understand and are you anticipating what could happen with cryptocurrencies? And the reason I mention this is not because I’m talking about Bitcoin, because I don’t believe that Bitcoin is going to be a currency today or in the future...

I’m bringing this up because as we think about the future of our company and the future of consumer behavior, I personally believe that there is going to be a one or a few legitimate trusted digital currencies off of the blockchain technology. And that legitimacy and trust in terms of its consumer application will have to be legitimatized by a brand and a brick and mortar environment, where the consumer has trust and confidence in the company that is providing the transaction...

There’s going to be lot of winners, a lot of losers.”

I have highlighted important points of his talk so that you may connect the dots to understand what are these elites working hard for. Indeed there will soon be one legitimate trusted digital currency, legitimized by a brand where the consumer will have trust and confidence.

He just disclosed a secret, using the magic of verbal words. He is clearly pointing towards a One World Digital Currency casted out off of the blockchain technology, legitimatized by the banking elites and the consumer will act as sheep as usual to place his trust on them.

Winners are them (Bitcoin inventors) because they have nothing to loose and losers will be the bitcoin working class community who are blindly putting their trust on a scam like Bitcoin willingly.

Read the bitcoin bubble burst section of this research paper to understand how each bitcoin will loose its value until it reaches $100 or below.