For consecutive 8 years from 2009 to 2016 , Bitcoin remained the currency of the Darknet community and the Elite’s for tax evasion. No one w...

For consecutive 8 years from 2009 to 2016, Bitcoin remained the currency of the Darknet community and the Elite’s for tax evasion. No one was well versed with how Bitcoin works, who was Satoshi Nakamoto and what exactly is the blockchain network.

The discussion was limited to bitcoin forums and tech blogs but it was not a talk of the general public. 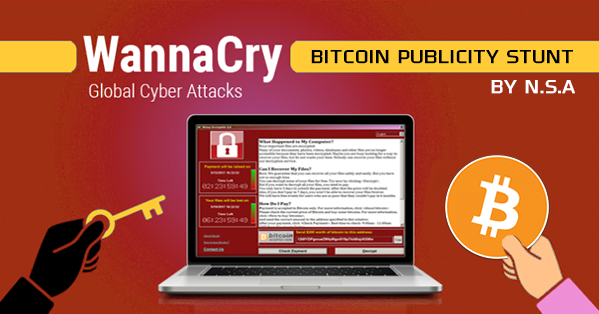 Most of you might have never heard of Bitcoin before 2017 as much as you hear it today. It has become the discussion of almost everyone from your Uber driver to your youngsters. Almost everyone now talks about investing in bitcoin. People have started taking loans in order to invest in cryptocurrencies.

Before 2017, there was less public and media attention towards bitcoin. In order to take everyone by surprise and force the entire world to talk about bitcoin, bitcoin inventors needed something exceptional.

WannaCry is a ransomware cryptoworm, which only targeted computers running Windows OS by encrypting files and demanding ransom payments of $300 – $600 via Bitcoin. The cyberattack mainly targeted users of Windows XP, an outdated Windows OS for which Microsoft largely ended support in 2014.

Victim computer was locked and he could do nothing but watch a welcome message screen containing information that guided the victim to pay bitcoins on the mentioned public BTC address in order to unlock the computer.

The attacker was so fond of Bitcoins that he accepted no other payment system except bitcoin. If you observe the Wannacry screenshot below, you will notice that it looks less like a ransomware and more like an advertisement poster promoting Bitcoin with full user guide such as:

About bitcoin,
How to buy bitcoin,
Bitcoin accepted here. 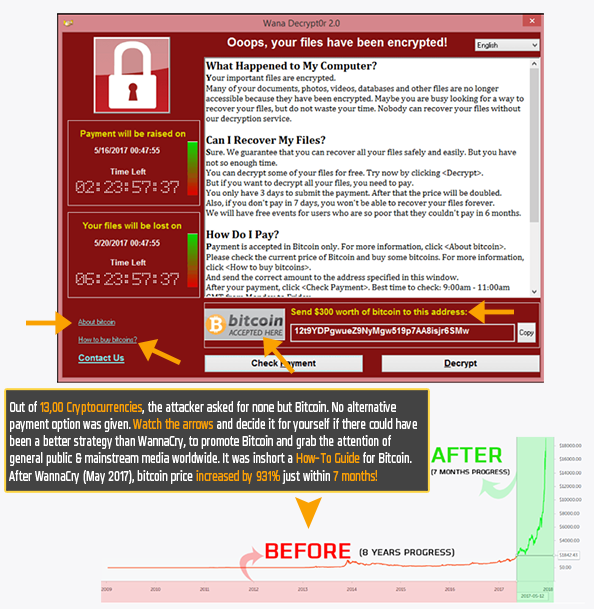 Bitcoin Popularity Before and After WannaCry Ransomware Attack (May 2017)

After WannaCry Ransomware attack, Bitcoin price increased by over 931% within 7 months! Contrary to its 8 years of no exceptional price movement except for 2013 when prices were moved from $150 to $1000 using trading robots.

Note: Apart from this publicity stunt, another big player that led to this soaring Bitcoin prices was cross trading between exchanged using the cryptocurrency called Tether that we discussed in Chapter#2.0

Any guesses for the architecture behind WannaCry Attack?

None other than American Government’s “National Security Agency” aka NSA.

USA tried its best to put all the blame for WannaCry on North Korea as usual but this time NSA’s own mistakes exposed it badly.

The EternalBlue exploit which was used in WannaCry Ransomware Attack was developed by none other than the U.S. National Security Agency (NSA) according to testimony by former NSA employees.

NSA had already discovered the EternalBlue vulnerability in Microsoft Windows, but instead of reporting it to Microsoft, which could prevent this worldwide Wannacry attack, NSA used it to create an exploit for its own offensive work.

EternalBlue was leaked in April 14, 2017 which was then integrated in WannaCry and launched in May 12, 2017.
Throughout this one month gap (code leak and attack launch), NSA kept its mouth shut and did not inform Microsoft to release security patches for older versions of windows.

As a result of this cyberattack more than 200,000 computers across 150 countries got affected, causing billions of dollars loss. 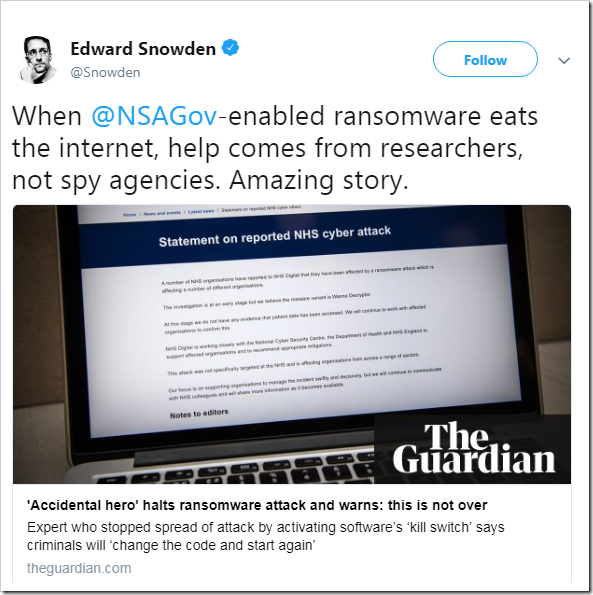 As soon as the world realized that NSA was behind this massive Bitcoin Ransomware attack, several security experts and world leaders expressed their anger over NSA's non-disclosure of the EternalBlue vulnerability.

Russian President Vladimir Putin placed the responsibility of the attack on NSA, for having created EternalBlue.

“they [NSA] could have done something ages ago to get this problem fixed, and they didn't do it".

When USA tried blaming North Korea for the attack, this is what a former NSA analyst Jake Williams said:

“To have a discussion about accountability for North Korea without the discussion of how they got the material for the attack in the first place is irresponsible at best, and deceptive at worst.

North Korea couldn't have done this without us. We enabled the operation by losing control of those tools.”

"Repeatedly, exploits in the hands of governments have leaked into the public domain and caused widespread damage. An equivalent scenario with conventional weapons would be the U.S. military having some of its Tomahawk missiles stolen."

NSA being the designer of Bitcoin hashing algorithm SHA-256, NSA being responsible for WannaCry RansomWare Attack for Bitcoin promotion and Nick Szabo’s (Satoshi’s) secret meetings with U.S government’s top officials, is enough evidence to prove “Who cooked the Bitcoin recipe”